Bonus material to supplement A Touch of Crimson:

Adrian Mitchell tossed the crime scene photos on the dining table in his hotel suite, watching them fan outward as they slid across the glass. “We’ll be staying a while.”

The two lycans seated at the table reached for the images, dividing them between them.

Unable to look at them anymore, Adrian pivoted and walked to the massive window overlooking the city of Phoenix, Arizona. Fighting his unwelcome agitation, he unfurled his wings, the pristinely white feathers with their crimson tips emerging first as tendrils of smoke, then solidifying into shape. He stretched and flexed them, the only sign of his disquiet hidden in what would be perceived by the lycans as a simple bid for comfort.

“Black Agnes,” one of them said behind him.

“Excuse me?” Adjusting the angle of his position, he looked at the two men examining the photos. One was stocky, built for brute force. The other was taller, leaner yet stronger. He’d watched them work, noting their strengths and weaknesses. They were a good team and a good match for him. Together they’d taken down three rogue vampires in less than two weeks. He expected to add this latest one to their kill sheets before they headed home again.

The taller one—Elijah—lifted his head and looked at Adrian with the luminescent green eyes of a creature tainted with demon blood. It was that touch of demon that enabled the lycans to shapeshift between man and beast. It also indentured them to Adrian. “An urban legend. There’s a cemetery statue—two of them actually—of a hooded figure. One was rumored to have supernatural properties. College kids used it as a pledge to join sororities and fraternities. The initiate was supposed to spend the night sitting in the statue’s lap, but one of them was found dead in the morning, with bruises and marks that suggested the statue had come to life and held her until she croaked.”

“That’s not a shrouded figure,” Adrian pointed out, his voice kept carefully neutral to hide his roiling fury. He was a seraph, a Sentinel. He was expected to stand above the vagaries of human emotions. But he couldn’t fight his reaction to the pictures spread out before him, those of a once beautiful young woman laid dramatically upon the lap of a massive marble statue of an angel. An angel whose head was bowed as if weeping over the bloodless body draped across its thighs.

A taunt. An undeniable “fuck you” from the vampire who’d taken the very last drop from a promising life.

“No,” Elijah agreed. “This rogue is a young one. Too stupid to know better.”

Only one who was young and foolish would deliberately attract the attention of a Sentinel. Adrian’s mouth curved grimly. “And he’ll get what he’s asking for.” 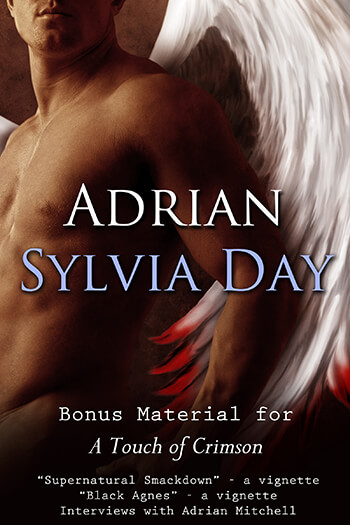