In Sylvia Day’s “On Fire,” Deputy Marshal Jared Cameron investigates a series of arson attacks in a seaside town, the biggest blast of heat comes from sexy fire inspector Darcy Michaels—until their scorching after-hours affair is compromised by a secret from Darcy’s past. View more information on On Fire.

In Shayla Black’s “Arresting Desire,” FBI Agent Jon Bocelli never stopped wanting beautiful professor Lucia DiStefano. She’s interested in taking her first lover, and he intends to be that man. When her past puts her life in danger, Jon risks everything to save her and prove this fling is forever.

In Shiloh Walker’s “The Unwilling,” Mica Greer and her former lover, ex-FBI agent Colby Mathis, once shared an intimate past and a powerful psychic gift. Now, they’ve been reunited by a bizarre series of murders—and an electrifying passion that could put them both in jeopardy

Deputy U.S. Marshal Jared Cameron waited until the Lion’s Bay sheriff sucked in a deep breath mid-rant, then he glanced at his partner.

“This winner is all yours,” he drawled, turning on his heel and leaving Deputy Trish Morales to it. She’d been assigned to him for just that reason: she had the patience of a saint and he had no patience at all. Especially not for defensive, posturing small-town authorities who whipped their dicks out and started marking their territories the moment he rolled into town.

“I’m not done. Where the fuck is he going?” Sheriff Miller snapped, followed by a far more modulated reply from Trish.

Jared closed the sheriff’s glass inset door behind him just to shut out the man’s voice. Pushing the irritation from his thoughts, he started through the bull pen toward the exit when an unexpected and unwanted complication walked into the station. He took scant note of her initially, but something drew his attention back.

Grudgingly he slowed, then came to a stop. Whoever she was, she was a bombshell. Not in the physical sense. In that regard, she was of average height, slim, and moderately proportioned. Her face was free of cosmetics and her brown hair was pulled back in a casual ponytail. If he’d been looking at a photo of her, he wouldn’t have looked twice. But in the flesh, watching her move was what snared him.

She was hot monkey sex in a brown paper wrapper.

The secret of her was revealed in the sensual fluidity of her body and her heavy-lidded, bottle green eyes. The primitive male in him recognized the attraction instantly, completely disregarding his brain, which didn’t have time for this sort of distraction. Unfortunately for him, the blue uniform slacks and embroidered white button-up shirt she wore told Jared he had no chance of avoiding her unless he wanted to switch with Trish and take point with Miller instead. He was stuck with deciding which part of his anatomy was going to be the least controllable: his fists or his dick.

Maybe he’d be lucky and she would be happily married with kids, therefore not the least bit interested in getting sweaty and dirty with him.

She was lost in conversation with the female deputy manning the counter when he approached. The glance she shot him was cursory, just as his had first been with her. Then it snagged. Her focus zeroed in, sliding over his body from the top of his head down to his scuffed work boots and back up again. When her gaze collided with his, she sucked in a breath and licked her lower lip.

Fuck. He was screwed. His brain was screaming at him to turn his ass around and take his chances with the sheriff instead. Assaulting the local authorities for getting on his last nerve would garner him less trouble than playing with the sizzling awareness arcing between him and the sexpot fire inspector.

“Here he is,” the deputy said unnecessarily, pointing at him.
Jared thrust out his hand and introduced himself. The moment his palm touched the bombshell’s, his blood rushed south and gave him a semi. He looked at her left hand almost desperately, cursing the lack of a wedding ring. A simple gold band would’ve killed his interest right then and there.

“Darcy Michaels,” she replied, in a voice pitched high enough to be this close to girlish. “I’m a fire inspector with the Lion’s Bay fire department.”

The pretty blond deputy at the counter smiled at him with the same invitation she’d given him when he first walked in. “Darcy’s the one who asked me to put out the information about the arsonist.”

The blonde was the type of woman he preferred to fuck—attractive enough to stir the most superficial interest and easy enough to want nothing more than a good time. Darcy Michaels was rousing something far deeper, igniting a hunger that was full-bodied and complex. The kind that overrode a man’s better sense.

Giving himself a mental kick in the ass, Jared caught the inspector’s elbow and steered her toward the exit. “Let’s go, Inspector.”

They’d barely stepped outside when she said, “You got here quick.”

He considered her voice. It was a cross between Marilyn Monroe and Jennifer Tilly. If anyone had asked him that morning what he thought of girly voiced women, he’d have said they annoyed the shit out of him. It was just his damn luck that Darcy Michaels was the exception. Every time she opened her mouth, his mind went straight into the gutter. 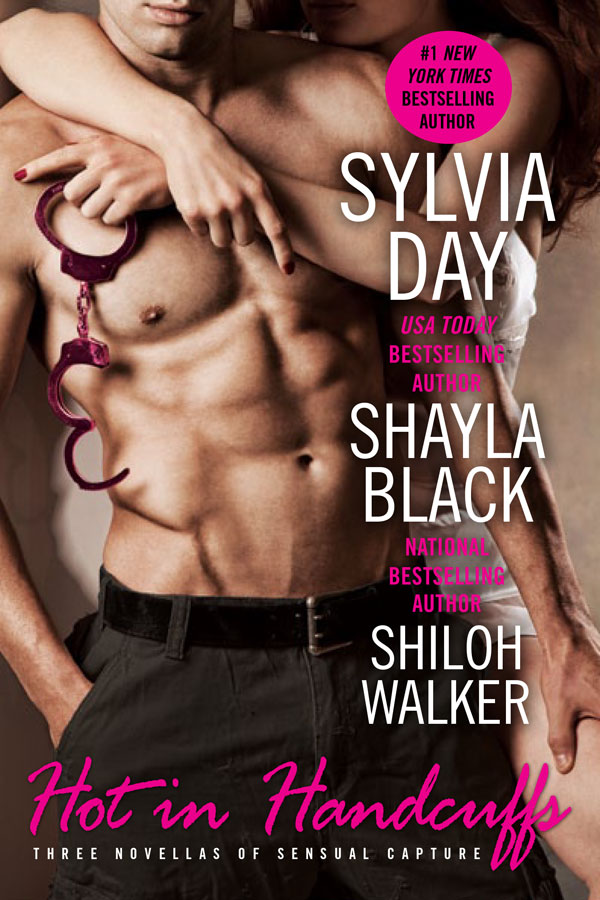 Sylvia's novella On Fire is also available individually as an ebook.

International Editions for
Hot in Handcuffs