edited by Kristina Wright with a foreword by Sylvia

Classic fairy tales are reimagined for an adult audience with twists (and kinks) to keep readers entertained.

The Disney Company made sure we all grew up with fairy tales. Most girls grow up with a favorite Disney princess or two and a stack of video cassettes or DVDs (depending on the era) of their favorite princesses’ stories. It’s become a part of girlhood to dream of “Prince Charming” and the miracle he’s supposed to bring to his true love’s life, staging grand rescues from evil stepmothers and their curses, and spiriting his mate away to his castle to never again have a care in the world.

I was twelve when my notion of Prince Charming changed. That was when my mother handed me a romance novel featuring a virile, ultra-alpha sheik and the woman he desires to the point of obsession. Looking back now, with our modern feminine sensibilities, we both admit the book is a “bodice ripper,” but at the time it was powerful, sexy stuff. Prince Charming wasn’t rescuing the heroine; he was her antagonist, her kidnapper, her beast to tame while he exposed her to her own potent sensual nature (and fell helpless to it himself).

Where are the fairy tales for readers like me?

Once upon a time, fairy tales were darker, grittier, and sexier. Rapunzel let down her hair and lifted her skirts. Sleeping Beauty wasn’t awakened by a mere kiss. Little Red Riding Hood is an allegory to the wolfish, predatory qualities of men. Fairy tales were written for adults, then later adapted to be more suitable for children. They were softened and sweetened, removing most of the spice.

Somewhere along the way we’ve come to believe that the magical and fantastical are for kids. To prove maturity, one is expected to cast off belief in the imaginary, but adults need fairy tales, too. We brave the dangerous forest of commuting every weekday, fighting off the trolls and goblins in our lives, outwitting the witches and villainous overlords we work alongside, and trying not to strangle the stock brokers who manage our golden nest eggs.

I’ve outgrown the softened and sweetened fantasies of childhood. The stories I crave are rawer, laced with dark magic and unfettered passions. Adult fairy tales should be gritty yet illusionary, edgy yet sinuous, violent yet dreamy. They should take what is recognizable in ourselves to the farthest degree, making it marvelous and terrifying, fascinating and titillating.

I still have a soft spot for Prince Charming, but I prefer him as a reward for the prince or princess who slays his or her own dragons. He should carry a bit of the Beast inside him and more than a little wickedness. He should bring his adventurous spirit into the bedroom, and he should be respectful of the value and independence of his true love. But that’s my fairy tale. For others, their tale may include a prince or princess who masters them, one (or few) who saves them from themselves or exposes a hidden beauty, like the swan from the ugly duckling.

The beauty of reading Lustfully Ever After is its celebration of the individual fairy tales in us all. I relished taking the ride, seeing how fluid the journey can be and how unique each creator’s vision was of something known and familiar. As a writer, it’s natural to say I’ll write what I wish was out there for me to read, but then I would be trapped by the limits of my own imagination. Within the pages of this collection, I was invited to join in the fantasies of others, which took me in directions I would never have thought to go, wrapped within the enchantment of fairy tales and folklore, and deliciously flavored with sex and love.

Here are the fairy tales for grown-ups. Enjoy! 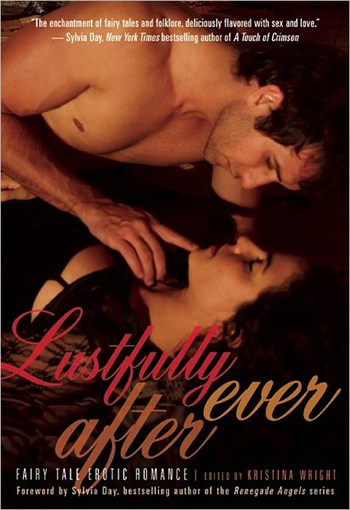