Wealth has its dangers…

There are disadvantages to being an heiress, as Eliza Martin knows well. Fortune hunters flock to her, acquaintances lie and pander, and lately, someone is engineering “accidents” to propel her to the altar. But Eliza will not be bullied, and she will get to the bottom of this plot. All she needs is a man to infiltrate her assemblage of suitors and find the culprit. Someone not easily noticed; a proficient dancer, quiet, and even-tempered.

…so do certain men

Thief-taker Jasper Bond is entirely too large, too handsome, and too dangerous. Who would believe that an intellectual like Eliza would be seduced by a man of action? But the combination of her stubbornness and the mystery makes the case one Jasper can’t resist. Client satisfaction is a point of pride and it’s his pleasure to prove he’s just the man she needs after all…

Original Cover for Pride and Pleasure 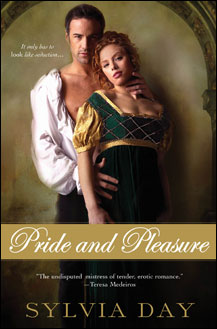 “Eliza…” Jasper came to sit beside her.

The air around her became charged with his energy.

I never feel so alive as I do when I am the object of a man’s desire, her mother had said, spinning like a giddy girl with her skirts held in each hand. The blood sings, Eliza. The heart races. It is the most glorious feeling in the world.

Why did Jasper have to be the man to awaken such reactions in her? Why did he have to prove, just by breathing, that she wasn’t immune to needing someone after all? She was so disappointed to realize there were indeed some shades of pleasure that could only be colored by another hand.

His dark eyes were warm with concern. “Please understand, I only wish to be thorough. Your safety is of the utmost importance to me.”

She nodded, believing the sincerity in his tone. A lock of her hair was dislodged by the movement, slipping free of her hastily tied ribbon to slide over her shoulder.

He stood. Holding out a hand, he assisted her to her feet. “Turn around.”

As Eliza pivoted, she disturbed the air, allowing the primitive scent that clung to him–horses and leather, tobacco and bergamot–to tease her senses. She jumped slightly at the feel of his fingers against her nape. Awareness of him swept outward, flowing across her skin like warm water. He lifted the curl from her shoulder and rubbed it between his fingers.

“Like fine silk,” he murmured. He loosened the ribbon securing her hair, returned the errant lock to its former place, and retied the whole more securely.

Her gaze darted around the room, hyperaware of her surroundings. Everything was rendered in brilliant clarity, from the crystals hanging from the many ornate candlesticks, to the inlaid mother-of-pearl glimmering from the tops of the end tables.

In the swirling confusion, she grasped the first thought that came to her… “Are you one of those gentlemen who have an unusually strong interest in red hair?”

“I have an unusually strong interest in you.” He pressed his lips to the bare skin between her shoulder and throat.

“Jasper,” she whispered, shocked by the violent quiver that moved through her. “What are you doing? Why did you come now… tonight… when I’ll be seeing you tomorrow?”

His hands fell to his sides. “I saw the way you looked at Montague. What he said made you see him in a way you haven’t before.”

Eliza faced him. He was more than a head taller, but his frame curved toward her in a way that made their proximity searingly intimate. As if he was about to twirl her into a waltz.

Her heart beat a little faster. Her breathing quickened. “I don’t understand.”

He cupped her chin and tilted her face upward. “You looked at him the way you look at me.”

“That’s impossible.” Montague incited none of this turmoil.

“I need you to regard me in the same manner with which I regard you.”

She was arrested by the way he looked her over. So intent. With a gaze that was fierce. Fervent. His fingertips followed the path of his perusal. Touching her forehead. Tracing her brows. Following the bridge of her nose.

Eliza, in turn, studied him unabashedly. His features were so perfectly formed, beautiful in their symmetry but masculine in their lines. It was such a pleasure to look upon him; he made her want to stare.

“How do I regard you now?” she queried breathlessly.

“Too aware. Trying to reason your way out of this attraction. Stop thinking,” he murmured. Tilting his head, he lowered his mouth toward hers. The approach was slow and deliberate. His grip was loose and without force. “Let yourself feel it.”

She stumbled back, panting because she couldn’t breathe when he was so close.

Jasper watched her retreat with hooded eyes. She was nearly beyond arm’s reach when he growled and caught her back. His lips sealed over hers with a boldness that stole what was left of her air. With one hand at her nape and an arm around her waist, Jasper took her mouth as if he owned it. Undeniably skilled and… hungry. A slanting, suckling, ferocious possession that stunned her completely.

Eliza sagged into him, unable to comprehend the ardor with which he kissed her. His body was astonishingly hard, like warm marble. From shoulder to thigh, he pressed unyieldingly against her. Without the barrier of her stays the sensation was… Dear God, she couldn’t describe the need she had to touch more of him. Her hands clenched and released at her sides, reaching for him, then falling away.

As if he understood, Jasper’s hand at her nape followed the length of her arm down to her wrist. His fingers circled it, then lifted her hand to his chest. Between his coat and waistcoat he urged her palm to splay over his heart. His skin burned through the layers of clothing between them. His heartbeat raced with the same recklessness as hers.

Her other hand clenched the hem of his coat and she whimpered, overwhelmed.

Her capitulation gentled him. The press of his lips softened and his grip slackened enough to allow her lungs to expand. Teasing rather than taking, Jasper licked the lower curve of her lip, goading her to taste him back. She did, trembling, uncertain.

At the first flick of her tongue, he captured it with soft suction. Startled, Eliza jerked in his arms, her breasts flattening against his chest. His groan vibrated against her, tumbling across sensitized nerve endings.

The clock on the mantel began to chime on the half hour, but Eliza was lost to time, focused instead on the luxuriant licks stroking deep into her mouth. Her hand moved across Jasper’s torso, feeling the muscles tense beneath her touch. A sound escaped her, a soft plea.

Jasper lifted his head, breathing hard. With heavy-lidded eyes, he studied her face.

“This,” he said gruffly, “is how you should look at me, the way you look at no one else. As if you long for me to finish what I’ve started. As if you ache to feel my mouth on you, my hands on you.”

She did ache. And felt unappeased, as if she had an unquenched thirst. Her skin was too sensitive. Her fingers trembled. She was far too hot.

He stepped back and turned away in a motion as elegant as it was powerful. She couldn’t help but follow him with her gaze. He was such a large and finely built man, yet he moved with such grace.

“Jasper.” Her pulse leaped at the look he shot her. 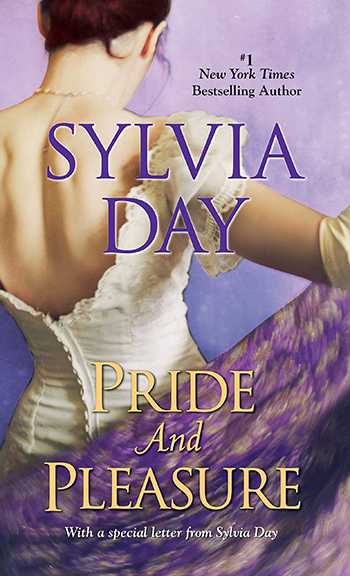 See all International Editions for
Pride and Pleasure →

Pride and Pleasure is a standalone title. However, many familiar characters make brief cameos in the book.