An infamous beauty. A daring warrior…

For five years, Sapphire has been the King of Sari’s most treasured concubine. Independent at last, she refuses to put herself in anyone’s control again. But now another’s meddling has led her into the path of proud, arrogant Wulfric, Crown Prince of the rival kingdom of D’Ashier… a man who is dangerous to her in every way.

…and a seduction that could destroy them both.

The daughter of Wulfric’s fiercest opponent, Sapphire is a prized warrior in her own right and highly skilled in the sensual arts—in short, Wulfric’s perfect match. A lasting union is unthinkable, but the bargain they strike—to spend one night together, and then part—proves impossible in the face of a desire powerful enough to bring two countries to the brink of war, and two hearts to the point of surrender…

Original Cover for In the Flesh 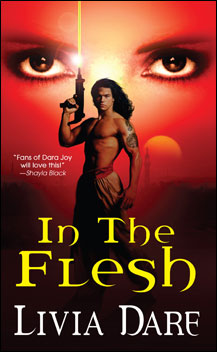 Wulf’s long-legged stride ate up the seemingly endless length of white stone hallway with ease. The guards stationed at various intervals bowed at the waist as he passed, their eyes wide as they stared at Katie squirming and swearing loudly over his shoulder. She had the vocabulary of a hardened soldier and she didn’t hesitate to use it. He’d never been so verbally abused in his life. Coming from Katie, he enjoyed it immensely.

The doors to the seraglio slid open when he approached. He entered to a chorus of eager greetings and sighs at his half-dressed state. As his concubines rushed toward him, he kept them at bay by holding up the hand not currently caressing Katie’s buttocks.

He turned to the elderly woman prostrated just to the right of him.

“Sabine.” He greeted his chamberlain with a smile. Once, she had been his father’s concubine. Now retired, she served Wulf by maintaining order in his harem. “You may rise.”

“Who is that you have there?” she asked, rising gracefully to her feet.

As he started toward the large rectangular pool that dominated the center of the room, she fell into step beside him. Three fountains broke up the tranquil surface of the water, the splashing sounds mingling with the melodious voices of his concubines and the sounds of birds chirping in the various cages that decorated the perimeter. The humid air was redolent with lush hothouse flowers, various perfumes, and luxurious bath oils. Jewel-encrusted doors lined the walls, each portal leading to the private quarters of a concubine. Drenched in the sunlight pouring from the massive skylight above, the expensive and precious gems winked and flashed to glorious effect.

He slid Katie from his shoulder, careful to keep his hold on her while maintaining her confinement within his robes. “Sabine, this is Katie.”

Grinning, he told Sabine, “She needs a bath and suitable garments. I want her body jewelry changed from sapphires to talgorite. I prefer her hair down. When she’s ready, bring her to my rooms.”

Sabine was eying the disheveled Katie appraisingly when the import of his words registered. Her gaze darted to meet his. “Y-your rooms, Your Highness?”

“That’s what I said.” With a flourish, he yanked the voluminous fabric of his robe from Katie, causing her to twirl outward from the enveloping folds.

She recovered her footing several feet away and glared at him. “Afraid to do it yourself, Wulf? We both know I can take you.”

His concubines gasped at her insubordination and her use of his given name, but he laughed.

“Yes. I’m quite taken.” His tone was a husky murmur, his gaze riveted by the sight of her bare body.

He opened his mouth to reassure her, but before he could speak, Katie spun on her heel and fled.

“Guards!” Sabine sounded the alarm before Wulf could react.

The doors slid open and four guardsmen charged into the room.

“Lock the door,” he roared as Katie leaped through the air to attack the nearest soldier. Naked as she was, the man was stunned and vulnerable to her assault. She kicked him dead center in the chest, knocking him flat on his back, then turned to engage the others.

Wulf raced after her.

“Don’t touch her!” Fear roughened his voice. Images of her injuries from the holo-room knotted his stomach. “Hurt her at your peril.”

Katie’s head turned at the proximity of his voice. Her grim expression betrayed her determination to find another way out.

He was a hair’s breadth away from catching her when she darted out of his reach and deserted the locked exit. He cursed. She backtracked into the room, heading toward the opposite side of the pool. Squeals and screams rent the air as startled concubines scattered out of her way. The birds in their cages cried out their alarm, their wings flapping frantically and littering the air with feathers.

She rounded the corner of the pool. Wulf vaulted diagonally across the small gap, his body stretched out as he flew over the water. He caught her, twisting in midair to absorb the impact when they crashed onto the marble floor and slid several feet.

“Let me go.” She struggled against him. He rolled, pinning her beneath him.

Their chests heaved together; his heart raced with the excitement of the chase. The scent of Draxian lilies filled his nostrils and relief at holding her after her frantic attempt at flight heated his blood. As Katie’s naked breasts pressed to his skin, his focus altered. Desire for her acted like a potent drug in his veins, making his entire body hot and hard.

Wulf lifted his head. “Everyone, out!”

His mind distantly registered the sounds of footsteps fading and doors slamming shut, but his focus was on the woman in his arms.

Taking her mouth, Wulf groaned his pleasure when she returned his kiss with equal fervor. He loved Katie’s body, so strong and lithe. She could fight and injure him—she had the knowledge and stamina—but she touched him with tenderness. She was toned by years of combat training, yet still soft, with generous curves and valleys that fit perfectly against him.

Katie began to struggle again, even as her tongue swirled greedily in his mouth. She didn’t want to want him, but couldn’t resist. That affinity stoked his lust to a fever pitch.

Wulf broke the kiss and buried his face in her throat. “Don’t fight me,” he murmured against her flushed, scented skin. “I’ll make it good for you.”

Gasping, she arched into him. “Release me.”

“I can’t.” He grabbed her wrists and pinned her arms above her head. He drew a taut nipple into his mouth, teasing it with his tongue before suckling her with hard, deep pulls.

Wulf moved to her other breast, nipping the hard peak with his teeth before soothing the sting with gentle licks. “Stop wriggling,” he rumbled, then he curled his tongue around the straining point of her breast.

Katie tried to buck him off but the movement only forced her legs to spread. His hips dipped between her thighs, settling perfectly into place because she was made for him.

“Remember last night?” he crooned. “How good it was?” His hips swiveled against hers, rubbing his rock-hard cock against her clitoris. “We were meant for this… you and I.”

As he rocked into her, massaging her pussy with the hard length of his dick, she moaned, “Give me the top.”

Wulf growled, remembering the way he’d felt last night when she plied her trade. “Why? So you can work?”

Holding her wrists with one hand, he reached between them to loosen his drawstring. His wrist rubbed against her and she hissed in pleasure.

Rough and impatient, he shoved his waistband down and his cock sprang free. With a deft twist, he pulled her over him, his legs kicking until he was freed from his pants. “It was a mistake,” he said gruffly. “I wasn’t thinking.”

“You’re not thinking now.” She gasped as he positioned his dick between her petal-soft lips and pushed into the tight, plush clasp of her pussy.

She held herself aloft with her hands on his chest, the slick walls of her sex sucking on the head of his cock.

He forced himself to wait. “Your choice, Katie. You said you could take me. Do it.” 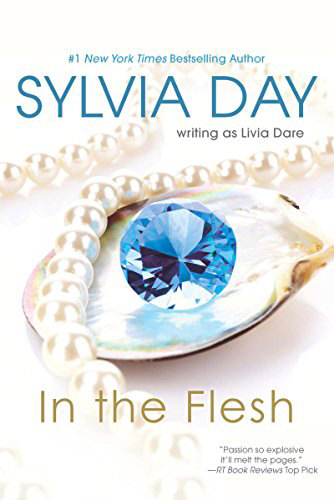