Star is an Interstellar Council judge. Her position requires her to pass sentence, hunt down the offenders, and administer punishments. She’s considered one of the best, and if she plays her cards right, she just might become the first of the Hunter species to ascend to the Supreme Court–her life’s goal. When she’s ordered to hunt down a rogue Jacian ambassador in heat, the precedent is death. Sympathetic, but following the law she holds so dear, she pursues him with the intent to kill.

Roark has entered his mating cycle. By Council law, he should be locked in a room with his pre-assigned partner for a week of non-stop sex that will get him through his heat. But he doesn’t want his pre-assigned. He wants Star, the luscious blonde judge whose compassion and intelligence has won his regard. The penalty for going rogue while in heat is death, but that’s a small price to pay for a week of sensual pleasure with the woman he desires more than anything.

Now the huntress is the prey, and when she’s snared by a man in heat, it’s passion that rules, not the law. Or does it? Roark still has his sentence, and his lover Star is judge, jury… and executioner.

Original Cover for Snaring the Huntress 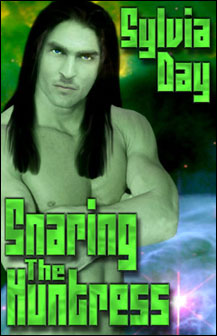 As she had every night for the last week, Star woke up without an orgasm.

Running her hands through her sweat-dampened hair, she growled in frustration. There was something fundamentally wrong with having a totally hot sex dream that didn’t end with her getting off.

“Dreaming of him again?”

The soft feminine voice echoed through the metal confines of Star’s ship.

Tossing aside her coverlet, she hopped out of bed, too worked-up to go back to sleep. “Yes, damn it. The bastard. If I didn’t want to fuck him so bad, I’d kick his ass.”

“You do realize you are speaking of a figment of your imagination?”

“Yeah, I know, Two-Thousand. I’m losing it from lack of sleep.” Naked, she padded barefoot down the hallway until she reached the bridge. “The craziest part is I still have no idea what he looks like. He’s just this yummy deep voice in the darkness. I swear that voice makes me so hot.” And his hands—those warm, tender hands. They knew just where to touch her, stroke her, caress her.

“Because he leaves!” Star complained. “Right before we fuck, he leaves.”

Dropping into the captain’s chair, she checked out the navigational readings. “How are we doing time wise?”

“Excellent. You will be on top of your fugitive soon.”

“Good. I could really blow off some steam right about now.”

“Will you kill him, when you capture him?”

Star sighed at the question, and turned her gaze away from the cockpit window and its view of the galaxy beyond.

“You answered with very little hesitation.”

Shrugging, Star kicked her feet upward to rest on the console. She’d purchased the newest model Starwing with the bonus earned from her last capture. “Why feed him rations all the way back to Primus, when they’ll just kill him when we get there? I’m a Hunter of criminals, not a restaurant. Besides, he’ll be a handful. I don’t want to deal with him.”

“While I agree that is practical, do you not worry that perhaps the Supreme Court Justices passed sentence too quickly?”

“You know,” Star grumbled, “for a computer, you do a lot of hypothetical thinking.”

“All correctional CPUs are programmed to second guess decisions. It helps keep judges on their toes.”

“Yeah, yeah. You know the rules, Two-Thousand, and so did he. Jacians can’t be on the loose when their heat is on them. They can’t control their sexual urges, and if they’re not locked up with their pre-assigneds, they’ll rape or go irreversibly crazy. It’s just that simple.”

“For you, maybe.” If her computer could have sighed, it would have. “What if he was not attracted to his pre-assigned partner?”

Leaning forward, Star snatched up her nail file, and began to shorten her claws. The damn things grew like weeds. “When a Jacian is in heat, even a deck plate is attractive.”

“Regardless, how would you like being locked in a room with someone you would not want to have sexual intercourse with?”

Star rolled her eyes, and shot a quick glance at the console readout. They were five clicks away from Rashier 6. Intel had reported that the Jacian had last been seen there. If his med file was correct, he’d be entering his heat now, which effectively trapped him on the planet. His body couldn’t do anything for the next week besides fuck. “You’re missing the point. He’s so desperate for it right now, he’d want to have sex with you.”

“Actually, it’s not. Poor bastard. At this moment, his brain is so sexually focused that piloting a ship is impossible, and using mass transport would get him arrested.”

I almost know how he feels, she thought grimly, her blood still thrumming from her earlier dream.

Except she wasn’t breaking Interstellar Council Law, and he was. Some of her cases were a little tougher than others, like this one. She really did feel sorry for the guy, but she was a judge and her job was to follow the letter of the law. Black and white. Right or wrong. There wasn’t any place for her to give leeway because she sympathized with him having shitty genetics. And she was the only judge who was of the Hunter species. Her ability to hand down fair verdicts was heavily scrutinized, and left her no room for error. While another judge might have been able to consider a reduced sentence, she could not. That was why she was so surprised the Jacian government had asked her to personally handle this capture. It was almost like they wanted their rogue ambassador dead.

“Maybe his pre-assigned had qualms.”

“Whatever, Two-Thousand. Now you’re being ridiculous. You know his pre-assigned was hot for it.”

Jacians were a telepathic species renowned for their exotic beauty. Pale green skin mottled with softer and darker shades of green. Thick, silky hair in various colors. Eyes in a rainbow of jeweled tones. And their inexhaustible sexual appetite, which they augmented by reading their partner’s fantasies, and then making them come true. All traits that made them highly sought after as mates.

“Have you been with one? Sexually?”

“Nope.” Star stood and stretched, lifting her arms over her head and pushing out the bony spines that coursed the length of her back before retracting them again. “I like sex as much as anyone, maybe more than most, but days on end with the same guy would kill me. Even if you are fucking most of the time, there has to be some time when you’re not. You gotta sleep and eat, right? And once men start opening their mouths, it gets tedious fast.”

Laughing, Star checked the programmed coordinates, and started the mental preparations for the hunt. She liked to be ready for anything. It’s why she was the best. Because of her skill, she was counting on this being an easy capture. The Jacian was holed up somewhere, either with a woman or going mad with need for one. He didn’t stand a chance.

“Of course I’m kidding, Two-Thousand. I love men. Everything about them. That’s what sucks about this assignment. Jacians don’t usually go rogue. In fact, this is the first case I’ve heard of in my lifetime. A shame to have to waste a prime Jacian male like this, but he had a trial and was duly sentenced. Wanted dead or alive. Those are our orders.”

“I am curious as to whether you agree with the popular opinion about their beauty.”

“I don’t know, I’ve never seen one.” Star opened the weapons bunker and withdrew her favorite blade. She didn’t need it. Physically, she was equipped with the claws and teeth to kill anything. But using a knife or blaster kept her prey alive. “I’ve always been too busy collecting the judicial credits I need to make it to the Supreme Court bench.”

“I have pictures of him,” Two-Thousand coaxed.

“No, thanks.” Moving back down the hallway to her quarters, Star caught up the silvery blond tresses that flowed down her back, and tied them in a knot at her nape. It was time to get ready for the hunt. “Jacians are pretty distinctive. I just have to find the one with the raging hardon.”

“But they have varying hair and eye colors.”

“I’ll keep my eyes trained below the waist. No problem.”

“How about a first name?”

“Ambassador Teron is good enough.” She sighed. Softness was a luxury she couldn’t afford. “You’re a computer, you don’t understand.”

“What do I not understand?”

“It makes it harder to terminate prey if they actually become individuals.”

“Yeah,” Star muttered. “That’s what he’ll be saying when I catch up with him.” 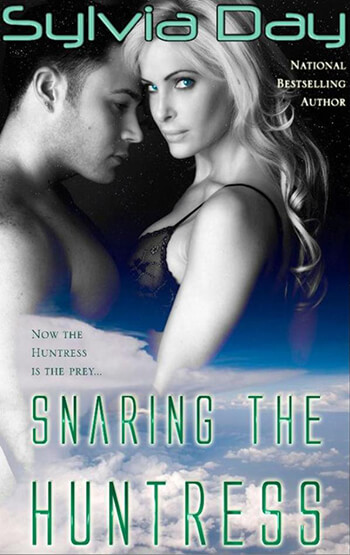 Bundle: Snaring the Huntress is also available as a part of Love Affairs.