“Iron Hard” is also available in Love Affairs, a collection of some of Sylvia’s best-loved novellas.

Steamlust is romantic erotica that reflects the excitement, fantasy and rebellion of steampunk. Not sure what steampunk is? Think Victorian elegance and aesthetics meets futuristic invention and exploration. The genre of steampunk itself has transcended the Victorian (or Edwardian) eras ― in Kristina Wright’s inventive anthology, it can be any time period, real or imagined, that blends elements of science, history, fantasy and technology.

Squaring her shoulders, Annie caught the brass ring held in the jaws of a massive lion’s head doorknocker and rapped it sharply. She was initially surprised when a human butler opened the door, but that passed swiftly. The baron could afford the luxury of live servants and their wages. She, on the other hand, had created Alfred from scrap parts.

The butler took her hat, gloves, and pelisse before showing her into a shadowed study.

As he bowed and moved to turn away, she said, “I will require more light, please.”

The striking of a match preceded the flaring of illumination from one of the room’s corners. Her head turned swiftly, her breath catching as a man stepped forward. She scarcely paid any mind to the door clicking shut behind the retreating servant.

“Will this do?” he asked in a low, rumbling voice. He turned up the flame in the gas lamp he carried and joined her at the desk where she’d deposited the birds.

She stared, riveted by the savage beauty of his face and the intensity with which he regarded her. His dark hair was long, hanging to his shoulders in a thick, glossy mane. A wide band of pure white strands embellished his left temple, framing a silver eye. Even as she watched, the metallic iris turned, the lens adjusting to accommodate the brighter light. A scar ran diagonally from his temple, across the eyelid and over his upper lip, explaining how he’d lost the eye he had been born with. The blemish did nothing to mitigate his comeliness. While it altered her perception of the symmetry of his features, it was in a manner she found highly appealing, as she did the air of danger surrounding him.

The provocation she felt was far from fear.

Breathing shallowly, her gaze raked over his face, admiring his dark winged brows, brilliant green iris, and the impossibly sensual shape of his mouth. His jaw was square and bold, his cheekbones high and expertly sculpted. He was far too masculine to be pretty, but he was certainly magnificent, and younger than the strip of white hair and his world-weary gaze would suggest. The drawings of him in the gazettes had never done him justice.

“Miss Waters,” he greeted, extending his gloved hand. “I cannot tell you what a pleasure it is to receive you.”

“My lord. The pleasure is mine.” She curtsied and placed her fingers within his palm, shivering as he clasped her. There was a sincerity in the commonplace greeting that startled her. Then something else unexpected–the unforgiving strength of metal curling around her fingers–stole her attention. “Your hand…?”

An entire arm. Mechanized. Excitement coursed through her.

He watched her with searing intensity. “Would you like to see it?”

Releasing her, he stepped back and shrugged out of his beautifully tailored sapphire velvet jacket. He tugged off his gloves; first the one on his mechanical hand, then its mate covering his physical one. She was amazed by the dexterity of his copper fingers as he freed the button at his cuff and rolled his sleeve up.

Her lungs seized at the wondrous sight. She took a step forward without her volition, her gaze riveted to the softly whirring copper and steel gears. They had been fashioned into the shape of an arm and so precisely meshed that she doubted even air could slip between the cogs. Encased in what appeared to be thin glass, it was worthy of museum exhibition.

“How extensive is the replacement?” she asked, fighting the urge to run her hands over it.

Her tongue darted out to lick her suddenly dry lips.

His green eye flashed with heat and his mouth–that wicked, wonderful mouth–curved in a rakish smile. “I would gladly show you the whole, but I’d have to undress further. Do you object?”

“No.” She quivered with anticipation. “Please.”

The baron loosened his cravat. She was so mesmerized by the expert craftsmanship of his artificial appendage, she scarcely registered that he was disrobing. Until the tight lacing of his abdomen was bared. Followed by the rippling expanse of his powerful chest.

“Oh, my…” Her arousal spiked. Her blood was hot for him, her body softening to accommodate the hardness of his. Unseemly thoughts filled her mind. Naughty thoughts. Highly sexual.

He was scarred on his chest as well. As with his face, the puckered bullet hole and multiple knife slashes only made him more delicious. Annie’s lips parted on lightly panting breaths, her breasts swelling within her bodice.

She flushed and tore her gaze away from the seductive expanse of flame-lit muscle and golden skin. It shocked her to realize how much effort was required to focus on his finely wrought arm instead. In truth, it had been far too long since flesh and blood had held more appeal than steel and grease. She found herself at a loss over which arm was more skillfully cast–the one afforded him by the grace of God or the one crafted by an earthly engineer.

“Exquisite.” Annie referred to the entirety of him, not merely the manmade pieces.

Judging by his sudden low growl, the baron knew it. 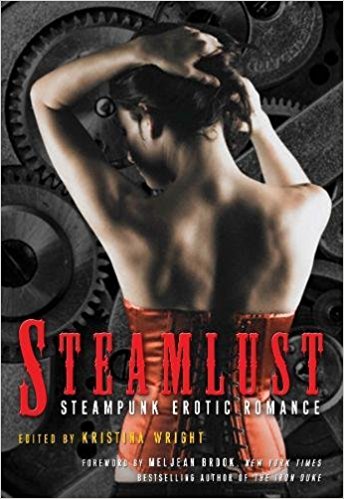