Featured in Men Out of Uniform

The Shadow Stalkers — men in uniform are trained to enforce the rules. Out of uniform, those rules are made to be broken.

He had three days to fix everything. Three days to remind her of how good they were together. She was a captive audience…

Layla Creed and Deputy US Marshal Brian Simmons have a history that is as hot and heartbreaking as it is unforgettable. Now their paths have crossed once again. This time things are twice as hot. Layla–a protected witness–has to come out of hiding and testify in a sensational murder trial. But as far as Brian’s concerned, there’s an even more pressing problem.

Once Layla testifies she’ll get sucked back into the Witness Protection Program. A new identity, a new location, a new occupation–and a new inspector to check up on her. In other words, out of his life forever. There is one more option–take Layla and go on the run. Rekindling what they once had should be easy. But a stranger in their shadow has plans of his own, forcing Brian and Layla to risk everything in the name of love.

They may enforce the rules, but when men in uniform are off duty and under the covers, they’re experts at breaking them. In this searingly sexy anthology, popular authors Maya Banks, Sylvia Day, and Karin Tabke present men in uniform–unzipped…

In Maya Banks‘s Soul Possession, Jessie spends a hot night with two sexy-as-sin detectives, only to be accused of murder the very next day. But when Jessie becomes the target of a serial killer, her two detectives will risk everything to have her back in their arms–and in their bed…

It’s time for protected witness Layla Creed to come out of hiding and take the stand in Taking the Heat by Sylvia Day. Layla has only three days to reconnect with federal marshal Brian Simmons–and slake the white-hot lust that has simmered between them for years…

Karin Tabke‘s Wanted follows the X-rated exploits of bad-boy cop Colin Daniels and the soon-to-be-ex-wife of a mob boss. He’s been hired to guard her body, but it drives him to distraction instead, putting his career–and his life–on the line…

Anthology Cover for Taking the Heat 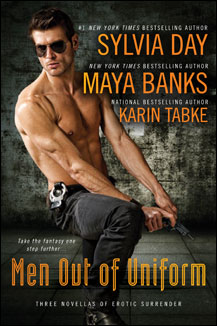 Sandoval’s murder had been nationwide news when it broke—the blatant attack had hit a nerve first struck by Enrique Camarena’s torture and killing by the same cartel. Layla had been the “unidentified witness” referenced in the reports. Although Brian had heard the story before, listening to Layla tell it, hearing her voice crack and tremble as she spoke . . . Fuck it all, she should have been with him, would have been, if he hadn’t been so goddamn stubborn.

“You still have nightmares, baby?” he asked quietly.

She looked at him, brushing her wind-whipped hair out of her face. “How did you know?”

“I know you.” He reached out and caught up her hand. “You hold your pain close to the chest.”

Her gaze dropped to their joined hands. “So do you,” she said quietly.

Brian didn’t know if she was referring to her brother Jacob’s death or their breakup. “Sometimes.”

“I’ve seen you laugh and I’ve seen you spitting mad, but I’ve never seen you cry.” She pulled away. “When I told you we were over, you didn’t even blink. I should have seen that coming. I was too young and naïve, I guess.”

His fist clenched, his palm aching from the loss of her touch. His damn pride had gotten in the way before, and it was clogging his throat now, preventing him from saying words that would slice him open if she threw them back in his face.

Still, he had to say, “You knew what you meant to me, Layla.”

“I knew it wasn’t enough. We had Jacob and great sex in common. That was it.”

“Bullshit.” He checked his mirrors for the millionth time, canvassing for trackers. “The sex was great because we had something special.”

“Then why didn’t you come after me when I left?”

There it was. Colossal fucking mistake number one. “I thought you needed a little time to cool off.”

“No,” she argued, setting her elbow on the windowsill and her head in her hand. “You thought I needed to grow up. That I’d eventually see things your way, which just goes to show what a mistake we were. I’m always going to be Jacob’s kid sister to you. I grew tits and reached the age of consent, but you were never going to treat me as a woman who deserved a say.”

“You’re starting to piss me off.”

“Hitting too close to home?” she taunted, with a sly smile that made his dick hard.

“No, sweetheart. You’re way off base.” At least in regards to the way he felt about her. Yeah, the sex between them had always been white-hot—in that aspect of their relationship, they’d never had any trouble—but he loved her, too. So much it ate at him. There were times in the last few years when he’d been half-insane with the need to see her and hear her voice, to hold her and feel her hands on him.

Silence fell between them, thick with all the things that needed to be said. With every mile that passed, he was taking her closer to the point where he’d lose her again. Once she testified, she’d get sucked back into WITSEC. A new identity, new location and occupation, a new inspector to check on her. He had three days to clear things up and fix everything that was fucked up between them. Three days to remind her of how good they were together. She was a captive audience, with no one around to screw things up for him.

Except himself. Unfortunately, he could do that well enough on his own.

Time was racing away from him, but that didn’t stop him from sitting there with his jaw locked shut and his gut churning. Scared shitless by the possibility that she was over him by now. She had grown up since he’d let her walk away, while he was the same guy he’d been before—rough around the edges and unable to say how he really felt about the most important thing in his world. 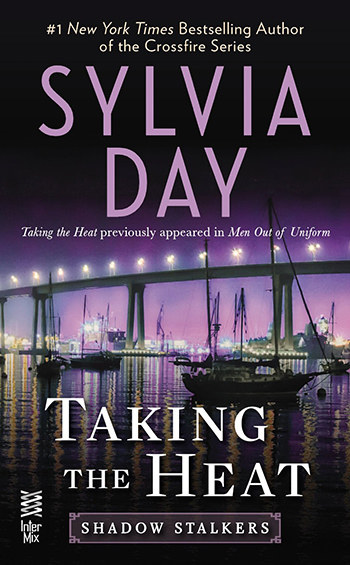 Bundle: Taking the Heat is also available as a part of Shadow Stalkers.

Anthology: Taking the Heat is also available as a part of Men Out of Uniform.

See all International Editions for
Taking the Heat →