Lady Pelham could not have designed a husband more suited to her needs. The Marquess of Grayson is a dear and enchanting friend and an unrepentant ladies’ man. Their union is solid; their hearts safe from one another. But every marriage has its surprises…

They were together for all the wrong reasons…

They are London’s most scandalous couple. Isabel, Lady Pelham, and Gerard Faulkner, Marquess of Grayson, are well matched in all things–their lusty appetites, constant paramours, wicked wits, provocative reputations, and their absolute refusal ever to ruin their marriage of convenience by falling in love with one another. Isabel knows such a charming rake will never appeal to her guarded heart, nor will she sway his philandering one. It is a most agreeable sham…until a shocking turn of events sends Gerard from her side.

Now, four years later, Gerard has come home to Isabel. But the carefree, boyish rogue who left has been replaced by a brooding, powerful, irresistible man who is determined to seduce his way into her affections. Gone is the devil-may-care companion who shared her friendship and nothing more, and in his place is temptation itself…a husband who desires Isabel body and soul and who will stop at nothing to win her love. No, this is not at all the man she had married. But he is the man who might finally steal her heart…

The Stranger I Married:

Original Cover for The Stranger I Married 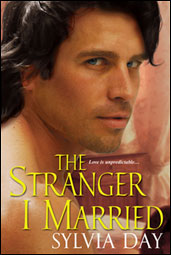 Mass Market Cover for The Stranger I Married 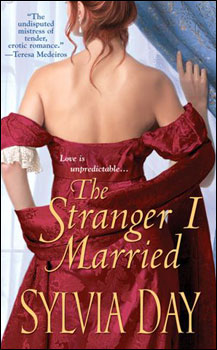 “His Lordship is at home, my lady.”

For a great many women such a statement was a common utterance and nothing of note, but for Isabel, Lady Grayson, it was so rarely heard, she could not remember the last time her butler had said the same to her.

She paused in the foyer, tugging off her gloves before handing them to the waiting footman. She took her time with the task, taking the extra brief moments to collect herself, and ascertain that her racing heart was not outwardly visible.

Isabel couldn’t help but wonder why. He’d rejected every missive she sent to his steward, and had sent none to her. Having read the dowager’s letter, she knew what had broken him that day he’d left both London and her. She could imagine his pain, having seen his initial excitement and subsequent pride at becoming a father. As his friend, she wished Gray had allowed her to provide him more than just that one hour of comfort, but he’d turned away from her, and years had passed.

She smoothed her muslin skirts, and touched a hand to her upswept hair. When she caught herself checking her appearance, Isabel stopped with a muttered curse. This was Gray. He would not care how she looked. “The study?”

The scene of that day.

She nodded, and squared her shoulders, shoring up her nerve. As ready as she would ever be, Isabel passed the curving staircase and turned into the first open door on the right. Despite her mental and physical preparations, the sight of her husband’s back struck her like a physical blow. He stood silhouetted in the window, appearing taller and definitely broader. His powerful torso tapered to a trim waist, beautifully curved ass, and long, muscular legs. Framed by the dark green velvet curtains, the perfect symmetry of his form stole her breath.

But there was a somber, oppressive air that surrounded him that was so distant from the carefree man she remembered. It forced her to take another deep breath before opening her mouth to speak.

As if he felt her presence, Gray turned before she managed a word. Her throat closed tight as a fist.

He was not at all the man she had married.

They stared at each other, both held motionless in the pregnant pause. Only a few years, and yet it seemed a lifetime had passed. Grayson was no longer a boy, not by any stretch of the imagination. His face had lost that faint remnant of youth, and time had etched its passing in the lines that bracketed his mouth and eyes. Not happy lines, she could see. Frown lines, lines of sorrow. The brilliant blue of his irises that had caused many women to fall in love with him were now a deeper, darker shade. They no longer smiled, and appeared to have seen far more than possible in only a four year span.

She raised a hand to her bodice, dismayed by the rapid lift and fall of her chest.

Gray had been beautiful before. Now, there were no words to describe him. She forced her breathing to slow, and fought off a sudden, desperate flare of panic. She had known how to handle the boy, but this…this man was not tamable. Had she met him anew, she would know to stay far away.

Even his voice had changed. It was deeper now, slightly raspy.

Isabel had no notion of what to say to him.

“You have not changed at all,” he murmured, striding toward her. The previous cockiness of his bearing was gone, replaced by the type of confidence one gained from walking through hell and surviving it.

Sucking in a deep breath, she was inundated with the familiar scent of him. A little spicier, perhaps, but he smelled like Gray, nevertheless. Staring up at his impassive face, she could do no more than shrug helplessly.

“I should have written,” he said.

“Yes, you should have,” she agreed. “Not just to warn me of your intent to visit, but before, if only to say that you were well. I have been worried about you, Gray.”

He gestured toward a nearby chair, and she sank into it gratefully. As he moved to the settee across from her, Isabel noted his quaint garb. While he wore trousers with jacket and waistcoat, the garments were plain, and of common materials. Whatever he had been doing these last years, it apparently had not required the latest fashions.

“I apologize for your worry.” One side of his mouth curved upward in a ghost of his former smile. “But I could not tell you I was well, when I was far from it. I could not bear to look at letters, Pel. It was not because they were from you. For years I avoided any sight of correspondence. But now…” He paused, and his jaw tightened, as if with determination. “I am not visiting.” 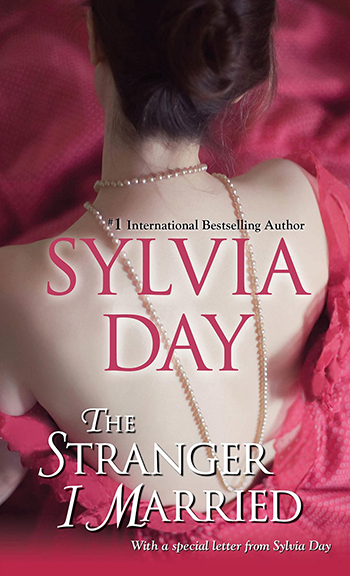 See all International Editions for
The Stranger I Married →