Writing the book is just the beginning... 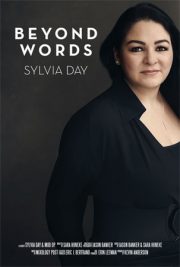 BEYOND WORDS is a feature documentary film that follows bestselling novelist, Sylvia Day, on a grueling world tour to promote One with You, the final book in the blockbuster Crossfire® series.

Through fly-on-the-wall footage, intimate interviews, and candid moments of life on the road, the film explores what it takes to be number one in the competitive world of publishing. Pressure builds as eighteen million readers worldwide await the final book’s release and a satisfying ending to the beloved series. Breaking new ground in the genre when the first book was released in 2012, the Crossfire series portrays the tumultuous relationship of two childhood sex abuse survivors.

Over the course of the book tour, Sylvia meets die-hard fans in the United States, Canada, England, and Germany, many of whom relate to the protagonists’ pain and struggle for intimacy on a profound level. For her devoted fans, Sylvia’s books are about more than romance and sex. They’re about finding hope and healing from past trauma, and meeting their creator is a dream come true.

Meanwhile, family life continues at home in Las Vegas. Sylvia must juggle the roles of writer, businesswoman, relationship guru, and parent, living up to expectations that would overwhelm many. But in her words, she faces the challenges head on because “everyone deserves a love story.”

Subscribe to SylviaDay.com Site Updates for the latest in film news.

"In recognizing the humanity of our fellow beings,

Thank you, @allena_inwonderland, for this week's #

"A dangerous and sultry novel about lies, secrets,