Come back into the shadows of a seductive underworld where lycans, vampires and angels vie for supremacy…

Elijah Reynolds is the most dominant of lycans, a rare Alpha whose skill on the hunt is surpassed only by his primal sexuality. When the lycans revolt due to the iron fist of angelic rule, he steps into command, becoming both enemy and coveted ally in the conflict between vampires and angels.

Vashti is the second most powerful vampire in the world, a lethal beauty with a path of devastation in her wake. Tasked with proposing an alliance between vampires and the lycans who killed her mate, Vash approaches Elijah, whose need to avenge a friend demands Vash’s death even as his passion demands her surrender.

Soon, their enmity erodes beneath an all-consuming desire. Elijah has never encountered a woman whose warrior spirit and fierce sexual appetite rivals his own, while Vash is faced with the one man strong enough to be her equal. But as war looms, each must decide where their loyalty lies–with their own kind or with the enemy lover they can no longer live without.

A Hunger So Wild:

Original Cover for A Hunger So Wild 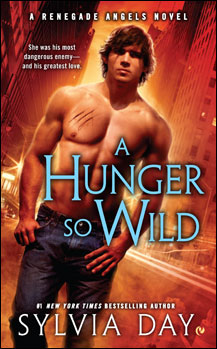 Vash stared at the naked, blood spattered lycan standing across the room from her and her fists clenched. The lack of the familiar weight of her sword sheaths on her back had already been driving her nuts, but now it pissed her off.

He’d killed her friend, and he was going to pay.

She stalked closer, her booted heels clicking across the uneven stone floor. They lived in a goddamn cave and fought among themselves like animals. Fucking dogs. She’d tried for days to talk Syre out of this fool’s errand, but the vampire leader would not be swayed. He believed the old “the enemy of my enemy is my friend” way of conducting a war and she might’ve agreed with that, if they were talking about anyone but lycans.

“The name is Elijah,” he corrected, watching her with the focused gaze of a natural hunter zeroing in on its prey.

Another male approached him with a towel in one hand and clothes in the other. Elijah took the towel and began to wipe the blood from his mouth and jaw. His gaze never left hers as the cloth moved across his broad chest and arms.

Vash found her attention reluctantly drawn to the stroking of white terrycloth over golden skin. He was ripped with powerful muscles from head to toe, beautifully defined in a way she couldn’t help but appreciate. There wasn’t an ounce of extraneous flesh on him and his virility was unquestionable, even without his display of impressive cock and weighty testicles. His scent was in the air, an earthy yet exhilarating fragrance of clove and bergamot that was rich with male pheromones.

He handed the towel to the lycan standing next him, then stroked his long, thick penis from root to tip.

“Like what you see?” he taunted in a deep rumbling voice that affected her physically. Blood oozed from a nasty gash in his calf, the scent so delicious her mouth watered for a taste of it.

She forced her gaze to lift from his groin with insolent leisure. “Just marveling that you don’t smell like wet dog.”

Vash laughed softly. “I’m here to help you, lycan. You’re safe while you’re underground, but you’ll have to surface at some point and beneath the open sky is where the angels will slaughter you all. Since you’re already fighting among yourselves, you won’t have a chance in hell against Adrian’s Sentinels without allies.”

The lycans around the room rumbled their disgust at the very idea. She raised her voice and spoke to the assembly at large. “I absolutely agree with you. I don’t want to work with you either.”

“Yet you came when Syre sent you,” Elijah said, stepping into a loose pair of jeans. “Walked straight into a wolf’s den at his order.”

She faced him again, her chin lifting. “We’re more civilized than you, lycan. We know the value of a hierarchy of power.”

He approached her, his barefooted stride sleek and predatory. The tight roping of muscles over his abdomen flexed as he walked, riveting her gaze. A surge of heat moved through her as his scent grew stronger.

Fuck. She’d been celibate too long if a lycan could make her hot.

Her hands fisted as he stopped in front of her. Too close. Invading her personal space. Trying to intimidate her with his powerful body and sharply-edged hunger. She saw his need in his eyes and smelled the enticing pheromones in the air around him. He hated her, yet he desired her.

Despite her height and heels, Vash had to tilt her head back to look up at him. “Just tell me to fuck off and I’m out of here. I only agreed to present the offer. I really don’t want you to accept.”

“Ah, but I have no intention of turning you down until you go into the details.” He caught a lock of her hair between his fingers and rubbed it. “And I want to see your face when you find out I didn’t kill your friend.”

Her breath caught. She told herself it was from surprise and not from the feel of his knuckle brushing over her breast. “My sense of smell is damn near as good as yours.”

One side of his mouth lifted in a cruel smile. “Did you check my blood sample for anticoagulants?”

She stepped back in a rush. She knew the Sentinels kept samples of every lycan’s blood in cryogenic storage facilities at the lycan outposts, but she hadn’t considered that those samples might be vulnerable to abuse. “What the fuck?”

“I was set up. You, however, are guilty of killing my friend. Hopefully you remember him, since his murder signed your death warrant. The redhead you pinned to a tree and left for dead?”

He circled her. Dozens of pairs of emerald eyes watched her with open hostility. The chances of getting out of the cave alive diminished to zero.

“If you kill me now,” she warned, “you’ll have both the vamps and Sentinels after you.”

“That’s problematic,” he murmured, rounding her shoulder from the back.

“But there’s something I want more than my life. If you help me get it, I’ll let you kill me in a way that looks like self-defense.”

Elijah stopped in front of her again. “I’m listening.”

With a wave of his arm, he gestured everyone out.

She snorted. “You can try, puppy. Don’t forget I have a few eons on you.”

In less than a minute, the room was emptied.

“One of your dogs killed my mate.” Familiar rage and pain raced through her veins like acid. “If you think what I did to your friend was bad, it was nothing compared to what was done to Charron. You help me find the ones responsible and let me kill them, I’m all yours.”

His gaze narrowed. “How do you plan on finding these lycans? What are you looking for?”

“I have the date, time, and place. I just need to know who was in the area then. I can narrow it down from there.”

She turned her head to look at him. “I could say the same about you.”

“You’d have to stay with me,” he pointed out. “I expect to be present anytime you question a pack member. It could take days, maybe weeks.”

The scent of his lust grew stronger by the moment and she—damn it all—wasn’t immune.

“I’ve been searching for years. A few weeks more won’t kill me.”

“No, but I will. Eventually. In the meantime, I don’t have to like you,” he said softly, “to want to fuck you.”

She swallowed hard, damning the elevated rate of her pulse, which she knew he could hear. “Of course not, you’re an animal.”

He circled her again, leaning in and inhaling deeply. “What’s your excuse?” 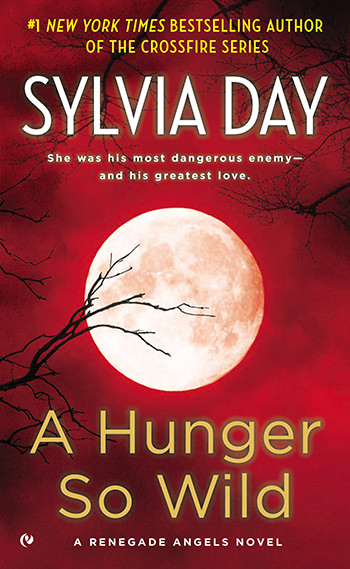