Miss Amelia Benbridge is ready to leave behind a past filled with heartbreak for a sensible marriage. Until temptation itself comes calling, with an invitation to seduction…

She loved and lost him once…

Amelia Benbridge and the Earl of Ware are the most anticipated match of the Season. Lord Ware is handsome, wealthy, and kind, and he understands that her love will always belong to her childhood sweetheart, Colin. When Colin died, Amelia believed she would never feel such passion again. But her primal reaction to the brooding stranger who approaches her at a masquerade, coaxing her into a moonlit minuet and a single, sensual kiss, proves otherwise…

Colin Mitchell knew a pairing between a peer’s daughter and a gypsy stable boy was impossible. Amelia’s mistaken belief in his demise afforded him the opportunity to return to her as a man of means. But time has slipped through his fingers. She is preparing to wed another and danger prevents him from revealing the truth. Colin can only bid her a secret farewell, but he underestimates her determination to unmask her phantom admirer. A forbidden kiss leads to her ardent pursuit and a soul-scorching affair. Amelia is perfectly attuned to his every desire, every thought–and hungry for stability he can’t offer her. For deception lies at the heart of their love, waiting to drive them apart once again…

A Passion for Him:

Original Cover for A Passion for Him 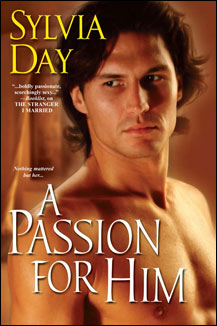 The man in the white mask was following her.

Amelia Benbridge was uncertain of how long he had been moving surreptitiously behind her, but he most definitely was.

She strolled carefully around the perimeter of the Langston ballroom, her senses attuned to his movements, her head turning with feigned interest in her surroundings so that she might study him further.

Every covert glance took her breath away.

In such a crush of people, another woman most likely would not have noted the avid interest. It was far too easy to be overwhelmed by the sights, sounds, and smells of a masquerade. The dazzling array of vibrant fabrics and frothy lace…the multitude of voices attempting to be heard over an industrious orchestra…the mingling scents of various perfumes and burnt wax from the massive chandeliers…

But Amelia was not like other women. She had lived the first sixteen years of her life under guard, her every movement watched with precision. It was a unique sensation to be examined so closely. She could not mistake the feeling for anything else.

However, she could say with some certainty that she had never been so closely scrutinized by a man quite so…compelling.

For he was compelling, despite the distance between them and the concealment of the upper half of his face. His form alone arrested her attention. He stood tall and well proportioned, his garments beautifully tailored to cling to muscular thighs and broad shoulders.

She reached a corner and turned, setting their respective positions at an angle. Amelia paused there, taking the opportunity to raise her mask to surround her eyes, the gaily colored ribbons that adorned the stick falling down her gloved arm. Pretending to watch the dancers, she was in truth watching him and cataloguing his person. It was only fair, in her opinion. If he could enjoy an unhindered view, so could she.

He was drenched in black, the only relief being his snowy white stockings, cravat, and shirt. And the mask. So plain. Unadorned by paint or feathers. Secured to his head with black satin ribbon. While the other gentlemen in attendance were dressed in an endless range of colors to attract attention, this man’s stark severity seemed designed to blend into the shadows. To make him unremarkable, which he could never be. Beneath the light of hundreds of candles, his dark hair gleamed with vitality and begged a woman to run her fingers through it.

And then there was his mouth…

Amelia inhaled sharply at the sight of it. His mouth was sin incarnate. Sculpted by a master hand, the lips neither full nor thin, but firm. Shamelessly sensual. Framed by a strong chin, chiseled jaw, and swarthy skin. A foreigner, perhaps. She could only imagine how the face would look as a whole. Devastating to a woman’s equanimity, she suspected.

But it was more than his physical attributes that intrigued her. It was the way he moved, like a predator, his gait purposeful and yet seductive, his attention sharply focused. He did not mince his steps or affect the veneer of boredom so esteemed by Society. This man knew what he wanted and lacked the patience to pretend otherwise.

At present it appeared that what he wanted was to follow her. He watched Amelia with a gaze so intensely hot, she felt it move across her body, felt it run through the unpowdered strands of her hair and dance across her bared nape. Felt it glide across her bared shoulders and down the length of her spine. Coveting.

She could not begin to guess how she had attracted his attention. While she knew she was pretty enough, she was not any more attractive than most of the other women here. Her gown, while lovely with its elaborate silver lace underskirts and delicate flowers made of pink and green ribbon, was not the most riveting on display. And she was usually disregarded by those seeking a romantic connection, because her longstanding friendship with the popular Earl of Ware was widely assumed to be leading to the altar. Albeit very slowly.

So what did this man want with her? Why didn’t he approach her?

Amelia canted her body to face him and lowered her mask, staring at him directly so he would not have to wonder if she was looking at him. She left him no doubt, hoping his long legs would resume their deliberate stride and bring him to her. She wanted to experience all the details of him–the sound of his voice, the scent of his cologne, the impact of proximity to his powerful frame.

Then she wished to know what he wanted. 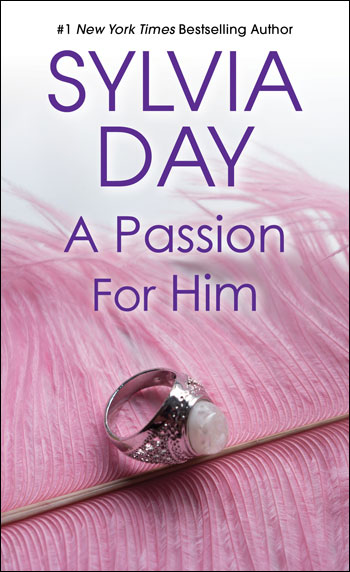