England, 1770. Beneath the silk and lace of London society lies a secret, elite organization of spies. Protecting the Crown from its enemies is hazardous, but for Marcus Ashford, protecting his heart from an unyielding passion is the far greater peril…

A matter of dangerous intrigue…

As an agent to the Crown, Marcus Ashford, the Earl of Westfield, has fought numerous sword fights, been shot twice, and dodged more than any man’s fair share of cannon fire. And yet nothing excites him more than the primitive hunger his former fiance, Elizabeth, arouses. Years ago, she’d jilted him for the boyishly charming Lord Hawthorne. But now, the elegant widow is his to defend, and he will do so while tending to her other, more carnal needs, showing her the depth of a real man’s desire…

Dangerous secrets led to the murder of Lady Hawthorne’s husband. Secrets she now holds in a diary many would kill to obtain. But to entrust herself to the protection of the most seductive man she’s ever known? Outrageous. Unthinkable. Irresistible. For it was Marcus’s strong passions and burning desire that frightened her into abandoning him years ago…and her answering craving has never waned. Now, he means to be at her service, in every sense. And perhaps the only sensible course isn’t to resist temptation, but to surrender to it completely…

Original Cover for Ask for It 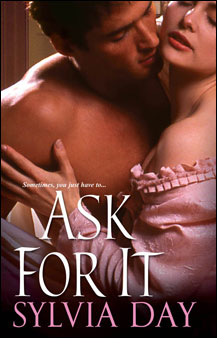 Reissue Cover for Ask for It 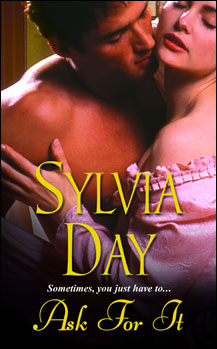 “Thank you for allowing me to repair myself here,” Elizabeth said softly from the doorway that led to the bedroom.

She’d used the room that was meant to be hers–that of the lady of the house. Turning to face her, he saw her staring down at her clasped hands. “William would have known something was amiss if I’d returned home looking a mess.”

Marcus studied her, noting the dark circles that rimmed her eyes. Was she having trouble sleeping? Was he tormenting her dreams the way she tormented his?

“Is your family not in residence?” she asked, looking about as if she could find them. “Lady Westfield? Paul and Robert?”

“My mother writes that Robert’s latest experiment is delaying their arrival. So that leaves you and me quite alone.”

“Elizabeth, this matter has become extremely dangerous. Once the man who attacked you recovers, he will come after you again. If he has associates, they won’t wait.”

She nodded. “I’m aware of the situation. I will be on my guard.”

“That’s insufficient. I want you to be guarded, night and day, not just outriders when you go out. I want someone with you at all times, even when you sleep.”

“Impossible. William will know something is amiss if I have guards at the house.”

Marcus set the glass down. “William is more than capable of making his own decisions. Why don’t you allow him to decide if he can be of assistance to you?”

She rested her hands on her hips. “Because I have made the decision. He is finally free of that damned agency. His wife is with child. I refuse to risk his life and Margaret’s happiness for nothing.”

“You are not nothing,” he growled.

He stood. “I cannot stop considering it. It rules my thoughts.”

“You were almost killed.”

“I was there…” Her voice broke and turning on her heel, she strode toward the door.

He moved swiftly to block her egress. “I’ve not finished speaking, madam.”

“I am finished listening.” She attempted to step around him, but he sidestepped quickly into her path. “Damn you. You are so bloody arrogant.”

She poked him in the chest with her finger and he stilled the movement with his hand. It was then he noticed her trembling.

She stared up at him, so tiny and delicate but formidable in her fury. The thought of her injured made his stomach clench. Deep in her eyes, he saw fear and his heart went out to her.

“Spitfire,” he murmured, pulling her toward him. His fingertips tingled from the touch of her ungloved hand. Her skin was so soft, like satin. His thumb brushed over the pulse at her wrist and it leapt to match his own quickened heartbeat. “You were so brave today.”

“Your charm won’t work on me.”

“I’m sorry to hear that.” He tugged her closer.

She snorted. “Despite everything I say, you still insist on attempting to seduce me.”

“Merely attempting? Not succeeding?” He laced his fingers with hers and found her hand cold. “I must try harder then.”

Violet eyes glittered dangerously, but then he’d always liked a bit of danger. At least she was not thinking about the assailant anymore. Her hand was quickly warming within his. He intended to warm the rest of her as well.

“You are trying quite hard enough.” Elizabeth took a step back.

He followed, directing her backward steps toward his bedroom, which waited on the other side of the private sitting room.

“Have women always fallen all over themselves for you?”

Arching a brow, he replied, “I’m not certain how I should answer that.”

He laughed and squeezed her fingers. “Ah… Jealousy was always the emotion most easily inspired in you.”

“I am not jealous. Other women can have you with my blessing.”

“Not yet.” He smiled when her scowl deepened. Stepping nearer, he slipped their joined hands around her back and tugged her to him.

Her gaze narrowed. “What are you about?”

“I’m distracting you. You are overwrought.”

Her lips parted as his head lowered. He smelled gunpowder and her heady vanilla rose scent beneath that. Her palm grew damp within his and he nuzzled his nose against hers.

“You were magnificent this afternoon.” He brushed his mouth across hers and felt her sigh against his lips. He nibbled gently. “Although it disturbs you to have shot a man, you don’t regret it. You would do it again. For me.”

He groaned, lost in the sound of her voice and the sweetness of her taste. His entire body was hard and aching from holding her so closely. “Yes, love?”

“You will.” He sealed his mouth over hers. 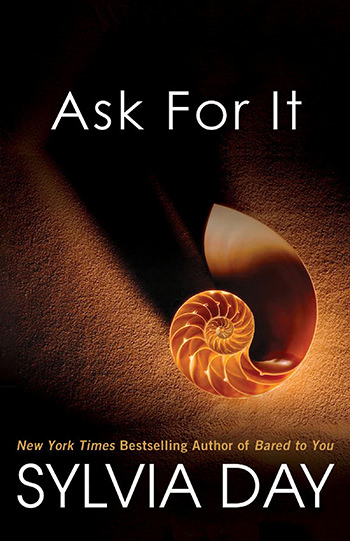