Sin City—Las Vegas—is home to humans and Infernals of all sorts: the good, the bad, and the ugly. If you ask Evangeline Hollis, “good” is in short supply, “ugly” might be amusing, but “bad” is most definitely her business. Eve is a Mark, a heavenly bounty hunter, and Las Vegas is her territory.

“…there was given to me a thorn in my flesh, a messenger of Satan, to torment me.”
– CORINTHIANS 2:7

“You know,” she said, mostly to herself, “I always thought ‘Sin City’ was just a nickname.”

“Ms. Hollis.” Raguel Gadara’s voice was laced with the resignation of a long-suffering parent. Softened by the resonance unique to all the archangels, it still chastised effectively. “Focus, please.”

Eve shot a wry glance at her boss. How the hell was she supposed to focus on wallpaper patterns when there was an Infernal in the room? She didn’t care that the kappa worked for Gadara Enterprises. All demons who’d defected to the Celestial side were secretly on the lookout for anything that would win back Satan’s favor. Knocking out an archangel would do the trick.

If anything bad happened to the archangel Raguel on her watch…

Shaking off the thought, Eve forced herself to concentrate on the task at hand. Working for Raguel Gadara—real estate magnate extraordinaire and owner of the Mondego Resort in Las Vegas—had once been a career dream of hers. The reality was more of a nightmare. Her years of interior design education and experience had been relegated to the sidelines of her “real” job: demon bounty hunting.

“The pale blue with lilies,” she decided, cocking her head to one side. In her previous secular life, she’d be sporting Minolo Blahnik stilettos and a pinstriped skirt. As a Mark—one of thousands of sinners drafted via the Mark of Cain to kill demons on God’s behalf—she was wearing Doc Martens and yoga pants. The thick, straight black hair she’d inherited from her Japanese mother was pulled back in a simple, braided ponytail. Those who were unfortunate enough to be “marked” never knew when they’d be called into service. It was best to be prepared for everything, all the time.

“A refuge from the insanity. If it takes guests longer to wear out, they might extend their stay. In theory.”

He flashed a smile that nearly blinded her. His pearly white teeth were brilliant framed by his chocolate-hued skin. For a moment, Eve was arrested by his appearance. His dark flesh was burnished by the golden sheen that distinguished archangels, making him beautiful to look upon. Awe-inspiring, and sometimes frightening. Celestial power thrummed through the air around him, creating a nearly irresistible compulsion to cede to anything he requested.

She shook that off, too.

The kappa lowered the wallpaper and popped a bubble of gum. Since Marks weren’t vigilantes, working with demons who hadn’t yet “crossed the line” was inevitable in the course of conducting secular business. But she didn’t have to like it. The stench of their rotting souls was worse than decomposition. Without the Mark of Cain, she’d be queasy now. One of the boons of the mark was the precision with which her body functioned—she no longer had physical reactions to most stimuli, emotional or otherwise.

“I also prefer the solid gray-blue carpeting,” Eve went on. “It’ll need to be cleaned more than a patterned pile, so we should restrict its use to the suites, but the color will add to the feeling of serenity.”

“Did you gravitate toward blue in your own home decor?”

She shook her head. “I used a lot of neutrals. I didn’t want anything to compete with my view of the beach.”

Her oceanfront apartment in Huntington Beach, California was her refuge from the world at large, a world in which Infernals lived alongside mortals who were blissfully ignorant. Such was the life she lived now, having her Big Mac served by faeries and her car detailed by werewolves.

“Understandable.” Gadara’s smile widened. “The hand of God is incomparable.”

She let that little dig roll off her. As a former agnostic, she was now forced to acknowledge a higher power. However, she certainly didn’t fall into the ranks of the devout. Too many of the Lord’s decisions were ones she disagreed with, and his lack of attention to detail chafed. The oversight of the day-to-day operations of the marked system was left in the hands of the seraphim. Like the American judicial system, there were bondsmen (the archangels), dispatchers (malakhim), and bounty hunters (Marks like her). God was content with occasional vague memos.

Gadara gestured for the kappa to proceed with Eve’s selection. Then, the archangel set his hand at the small of her back and urged her toward the open door leading to the corridor. “Will dinner at seven be acceptable?”

He wasn’t coming on to her or making a request. Gadara liked to keep her close for the same reason all angels and demons went out of their way to get to her: they wanted to irritate the two men in her life—Cain and Abel. The brothers went by the names Alec Cain and Reed Abel in present day, but they were the infamous siblings of biblical legend nevertheless. Gadara was as ruthlessly ambitious as the other archangels, and she was a unique advantage to him because pulling her strings kept both Cain and Abel towing his line.

“She’s not available tonight, Raguel.” The low, deep voice that intruded sent a mental shiver of awareness through Eve.

If not for the mark’s regulatory affect on her body, she’d have goose bumps. Alec Cain was her mentor in the marked system and the love of her life. He’d roared into her life on a Harley when she was almost-eighteen, and by the time he left her behind she was madly in love and no longer a virgin. She’d still been comparing other men to him ten years later when Reed Abel entered her life and branded her with the Mark of Cain. That started a triangular relationship she’d once thought would be impossible for her.

Actually, she thought wryly, it was impossible. In every way. Being the latest point of contention in the oldest sibling rivalry in history was a tremendous pain in the ass.

Turning her head, Eve watched Alec approach with his quick, surefooted stride. Of course he suffered none of the effects of teleportation that she—a lowly Mark—did. That would be fair; God didn’t play fair.

“Why are you here, Cain?” Gadara couldn’t have sounded more reproving.

“With all the Infernal activity in the area, you have to ask?” He raked Eve with a blatantly sexual glance. “More importantly, I miss my girl. You’ve monopolized her long enough. Tonight, she’s mine.”

She smiled at the way he purred his last sentence. He was trouble and made no effort to hide it. His well-worn jeans, scuffed steel-toed boots, and overlong hair warned women to tread carefully where he was concerned. The “bad boy” look wasn’t an affectation by any means. Alec was the original and most ferocious of all the Marks. He was also God’s primary enforcer. Every other Mark took orders from mal’akh “handlers”, but he took his orders directly from the Almighty himself.

Gadara bared his teeth in a gesture an idiot might think was a smile. “I believe Ms. Hollis intends to be present at the pre-opening of the Two to Tango club this evening.”

Evangeline. Eve. Angel. A nickname only he ever used. He still said it with the seductive rumble that landed her in this Mark of Cain mess to begin with. There were a lot of reasons why she loved him, but that nickname and the way he showed such pride in her accomplishments were definitely at the top of her list.

He groaned. “The things I do for you.”

The thought of him in a tuxedo made her hot. Alec was like skydiving—the thrill of the fall was addicting, despite knowing the ground was rushing up to meet you.

Her smile faded as his look of discomfort took on an unmistakable edge. His left biceps twitched, telling her his mark was burning—Heaven’s way of calling Marks into service. 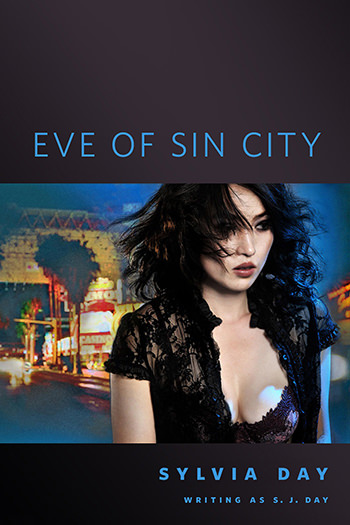 Bundle: Eve of Sin City is also available as a part of Marked.

Bundle: Eve of Sin City is also available as a part of Three Eves – The Marked Series Collection.