Heat of the Night:

Original Cover for Heat of the Night 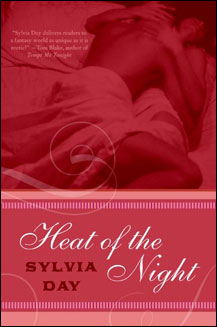 The doorbell rang and Stacey turned her head to scowl in the direction of the foyer. If she’d been at home, she would have ignored it, but she was watching Lyssa’s house and pets while the boss was on a mini-vacation with her fiancé in Mexico, so that meant watching out for Lyssa’s packages, too.

Grumbling under her breath, Stacey stood and crossed the soothing beige carpeted living room to the marble-lined entrance hall. JB hissed and followed her, rumbling his demon cat’s warning. He hated visitors. Well, he hated everybody pretty much, but especially total strangers.

The bell rang again, impatiently, and she called out, “Hang on! I’m getting there.”

Stacey turned the knob and pulled the door open. “You gotta give a girl a minute to get–”

A Viking stood on Lyssa’s porch.

And he was devastatingly gorgeous.

Gaping, she took a long, hard look at the blond giant who filled every inch of the doorway. He was at least six foot four, with a sword hilt peeking over his left shoulder and a brawny chest that would make Dwayne “The Rock” Johnson jealous. His arms were massive, ripped with taut muscles that stretched the golden skin covering them. He wore a straight black, sleeveless v-neck tunic that looked painted on and pants that clung to lean hips before flowing into loose pants legs. On his feet he sported wicked-looking combat boots.

“Wowza,” she murmured, duly impressed. The man was hot, hot, hot. Even in a costume. Chiseled jaw, a sinner’s mouth, arrogantly slashed brows, and a perfect nose. In fact all of him was perfect. At least the parts that she could see. Gorgeous in a way that was hard to define. There was something different about him, a physical charisma or perhaps a foreign appeal? She couldn’t put her finger on what it was that was so unique; she knew only that she’d never seen a more beautiful man, ever.

He wasn’t beautiful in the “pretty” sense. He was beautiful in the rocky moors sense, or the Serengeti sense. Harsh and untamed. Awe-inspiring in a wholly intimidating way. And because she was intimidated, Stacey did what she excelled at.

Cocking her hip to lean into the door edge, she flashed a bright smile. “Hi.”

“Who the hell are you?” the man demanded, his voice rumbling with a burr that was charming and delicious, even though his attitude wasn’t.

“You’re not Lyssa Bates,” he rumbled.

“Damn. What gave me away? The short hair? The big butt?” She snapped her fingers. “I got it! I’m not drop-dead gorgeous and built like a brickhouse.”

The corner of his luscious mouth twitched. He tried to hide it, but she saw it. “Honey, you’re gorgeous and built, but you’re not Lyssa Bates.”

Stacey touched her nose, knowing that she had to be looking like Rudolph the Red-Nosed Reindeer and sporting bloodshot eyes to boot. Some women looked great when they cried. She wasn’t one of them. And built? Ha! She’d had a kid. Nothing was where it used to be and she’d never dropped the last ten pounds from her pregnancy. Unable to think of a witty comeback because her brain was fried by his maybe-a-compliment, maybe-a-joke, she said, “Lyssa’s out of town. I’m watching things for her while she’s gone.”

“Is Cross here?” He looked easily over her head and into the condo.

He looked back down at her, frowning. “Aidan Cross. He lives here.”

“Uh, yeah. But if you think he’d let Lyssa go anywhere without him, you’re nuts.”

“True.” Something passed through his eyes as he looked at her.

Jeez, she had to go on vacation to wherever the hell Aidan was from. Obviously Hunkalicious on the porch was from there, too. Same brogue. Same sword fetish. Same hotness level.

“I’m going to stay here until they get back,” he pronounced, taking a step forward.

He crossed his arms. “Listen, sweetheart, I’m not in the mood to play games. I feel like shit. I need to crash for a while.”

“Listen, babe,” she retorted, mimicking his pose. “I’m not playing. Sorry you feel like crap, but my day sucks, too. Go crash somewhere else.”

She watched his jaw tighten. “Aidan wouldn’t want me staying anywhere else.”

“Oh yeah? He didn’t say anything to me about anyone coming by. I don’t know you from Adam.”

“Connor Bruce.” He thrust a massive hand at her. She hesitated a moment, then took it. The heat of his palm burned her skin and spread tingles up her arm. She blinked.

“Hi, Stacey.” He tugged her into his chest, lifted her feet from the tile, and stepped into the condo, kicking the door shut behind them.

“Hey!” she protested, trying to ignore how delicious he smelled. Musky and exotic. Male. Sexual male. Dominant male. It made her want to bury her face in his powerful neck and breathe him in. Wrap her legs around his hips and rub up against him. Absolutely bizarre considering how pissed off at him she was.

“It stinks outside,” he complained. “I’m not standing out there anymore.”

“You can’t just barge in here!”

“Okay, you can. That doesn’t mean you should.”

Connor paused in the living room and looked around. Then he set her down, lifted his sword-holder-thingy over his head, and leaned it against the wall near the door.
“I’m going to bed.” He stretched his arms and back in a pose that made her mouth water.

“So? Don’t touch that.” He pointed to his sword, then turned toward the stairs.

“Fuck you.” Stacey set her hands on her hips and glared.

He paused with one booted foot on the lower step. His gaze dropped to her bare feet, then rose slowly and hotly all the way back up, stopping at the juncture between her legs, then her breasts, before lingering over her lips and meeting her eyes. She’d never been stripped bare like that before in her life. She swore he’d looked right through her low-slung jeans and tank top to the skin below. Her breasts swelled, her nipples hardened. Without a bra — hey, she wasn’t expecting company — it was obvious his perusal had turned her on.

“I’m tempted, darling.” His brogue was thick and warm. “But I’m in no condition to do you justice right now. Ask me again when I wake up.”

Her foot tapped on the carpet. “I’m not your honey, sweetheart, or darling. And if you go upstairs, I’m calling the police.”

Connor grinned, which transformed his features from too-hot-to-handle to absolutely divine. “Sure thing. Make sure they bring handcuffs…and leave them behind.”

“They won’t be leaving you behind!” How in hell could the man make her hot and bothered and hot under the collar at the same time?

“Call Aidan,” he suggested, climbing the stairs. “Or Lyssa. Tell them Connor’s here. See ya later.”

Running over to the stairs, Stacey prepared to yell up at him. Instead she found herself admiring his perfect ass. 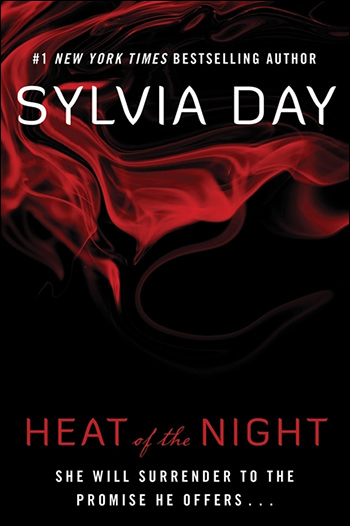 See all International Editions for
Heat of the Night →