Lyssa has been having the most incredible dreams about a man whose blue eyes hold the promise of decadent pleasures and tempting intimacies. And then he appears on her doorstep! This intoxicating stranger is just as irresistible as the man of her dreams . . . but with her surrender there is also grave danger . . .

Because Aidan is on a mission, and the passion that consumes them body and soul could have dire consequences. Loving the mortal woman prophesied to destroy Aidan’s world is not only impossible . . it is forbidden.

Pleasures of the Night:

Original Cover for Pleasures of the Night 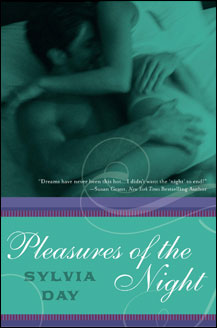 Digital Cover for Pleasures of the Night 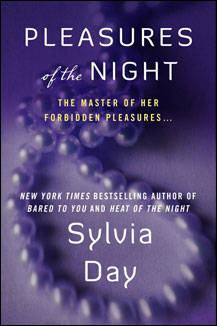 This excerpt contains adult material and is intended for readers 18 years of age or older.

As sunlight flooded his vision, Aidan blinked and stared down at the woman in his arms. His heart stopped, every cell in his body arrested by the flowing golden tresses that tumbled across the sand.

“What…?” She gasped, lovely dark eyes widened in surprise as she looked around. “Where are we?”

A soft tropical breeze ruffled his hair, and reggae played in the background, but his eyes never left her face. She was confused, her short nails digging into the skin of his forearms, and he couldn’t form one coherent word to reassure her.

Lyssa Bates was stunningly beautiful, her features both patrician and sensual. Her mouth full and red, kissable. Her eyes tip-tilted seductively, revealing both intelligence and innocence. Why had she pictured herself as worn and tired-looking?

Because that’s the way she felt.

“Oh my God,” she breathed, her fingertips touching his face reverently. “You’re gorgeous.”

And then they were plunged into darkness. The music fell silent and the fragrant sea breeze disappeared, leaving only the two of them intertwined, their hearts racing next to each other.

“What happened?” she cried plaintively.

Aidan was immobilized in shock. He had desired her scent, the feel of her body, the blunt way she spoke… Regardless of her facial appearance, he’d wanted to take her beneath him and fuck her senseless. Sex as a distraction had always worked for him, and from her response to his embrace, he’d known it would work for her, too.

Then he saw her. And now he wanted something more.

“You got scared,” he managed hoarsely. “Lost the dream.”

As he struggled with the implications, she resumed caressing his face, learning his features by touch as a sculptor would. He had no idea what she’d seen in the light. Her dream would make him into whatever she desired most. For the first time he resented that, wishing the effect he had on her was genuine and the face she admired so much was his own.

Just as he was.

He rolled, pulling her over him, his arms dropping to the ground. His head fell back and his eyes closed, the weight of his dilemma crushing his chest, making it hard to breathe. An eternity of seducing had given him enough insight to be certain—something fragile had taken root in the brief moment their eyes had met.

It needed to be crushed, and Lyssa forgotten.

“Yes?” His voice was gruff, and he felt the confusion it caused ripple through her. He should let her go, move her off him.

But he couldn’t do it.

Then she lowered her mouth to his, her softly fragrant hair surrounding him, encasing them together, until all he was cognizant of was her and how much he wanted her. Her lips touched his, a brief kiss, a gentle pressing. He groaned in painful awareness. Emboldened, her tongue flicked out, wetting his bottom lip before she sucked on it with a rhythmic pull that made his cock swell and ache. Lyssa set her hands on either side of his head, lifting slightly to brush her breasts back and forth across his chest.

Aidan Cross, Elite Warrior and immortal seducer, was being consummately seduced for the first time in his endless memory. And Lyssa Bates was very, very good at it.

He’d wanted to distract her and get laid. Now, mating with Lyssa had become a dangerous tangle. His brain was not analyzing step by step the best way to excite her so he could hurry up and thrust his cock into her. His brain was barely functioning at all, other than registering panic at the depth of his craving. He wanted to hold her close, take his time, arouse her to madness with his mouth and hands before sliding into her and letting her come. Over and over again.

Not to forget himself. But to find himself. To remember what it felt like when he still had hope, to remember when he hadn’t been afraid to care about someone.

Opening his mouth to speak, he was instead plundered by her kiss, her tongue sweeping inside, stroking along his, making him shiver. She moved, her thighs straddling his hips, her cunt to his cock, her lithe body gliding sinuously along his in a full-body caress. His chest rose and fell so rapidly, he felt dizzy. Sweating, he reached to push her away, but his muscles refused to comply.

“The sand,” he gasped, turning his head, which freed her mouth to nibble along his jaw.

Instantly, sand cushioned his back.

“The sun.” If he forced her focus to shift, perhaps her ardor would lessen enough to allow him to resist and save himself. His burgeoning fascination with her couldn’t be allowed to deepen. There was nowhere for a relationship between them to go, and even if there was, it was hopeless. He needed to dedicate every bit of energy he had to the fight. He couldn’t afford to lose the concentration required to do his job properly.

The air around them lightened slowly, like a sunrise, bathing her in a golden glow that formed a halo through her hair. She was an angel to him, a woman both open and innocent, yet not as fragile as circumstances made her appear.

“Please, don’t stop,” she breathed in his ear, making him shiver.

She ground her hips downward onto him, his cock jerking at the feel of her heat burning through to his most sensitive skin. “You want me,” she argued stubbornly.

“Yes, but there are things you don’t—”

Aidan growled as she shimmied again. “Oh, fuck it!” he muttered, rolling to pin her beneath him.

“My thoughts exactly,” she said with laughter in her voice and eyes.

Deliberately turning off the part of his brain that was urging him to think twice, Aidan let his body take over.

This was what he knew, what he’d spent centuries doing, and he’d never wanted a woman this badly. He could face-off against legions of Nightmares, yet he was afraid to fuck a woman he desired?

“Clear your mind of everything but me,” he said roughly. “Give me the lead.”

Concentrating with more focus than he’d ever had to use before, Aidan took over the dream, altering their surroundings, creating a circular room lit by candles and scented by exotic flowers. Spicy incense burned in various holders, releasing thin wisps of fragrant white smoke into the air. Dominating the velvet-draped interior of the space was a massive round bed piled with a profusion of silken scarves in various colors. It was there that he pictured them, lying amid the softness, their skin bared and pressed together. Now that he was decided, he would ensure this was a night neither of them would ever forget. 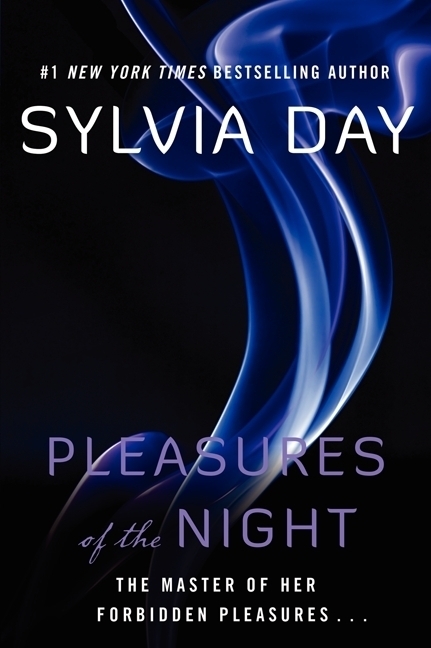 See all International Editions for
Pleasures of the Night →