Back to the main Extras page →

Originally posted as a Tell-Tale on AccessRomance.com — January 2007 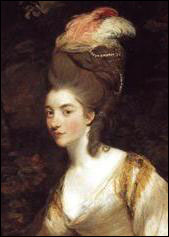 One of my favorite research subjects is Georgiana Cavendish, Duchess of Devonshire (born Lady Georgiana Spencer, of the same Spencer family as Princess Diana). Georgiana was a vivacious woman known for many “scandalous” things, including trading kisses for votes in the 1784 general election (as immortalized in the cartoon below.) 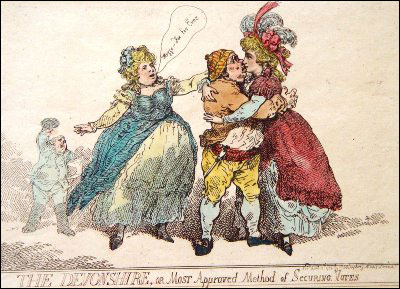 She was also known for her love of gambling, her arranging of a long-standing ménage-a-trois arrangement between herself, His Grace, and her best friend, and her affair with Earl Grey (namesake of the delicious tea) which produced a beloved but illegitimate daughter whom she was forcibly parted from by the rules of propriety. She was a lauded beauty of her time and politically active long before the women’s suffrage movement. 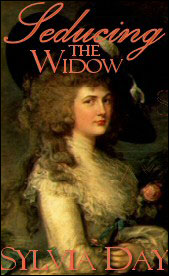 Before an “official” cover was made for Ask For It, I had a designer create this one for Seducing the Widow (the title of Ask For It before it was changed) using Georgiana’s famous portrait. Her slight smile hints at secrets I’d love to be privy to!

I hope that when you read [my books], you think of the many fascinating women of those bygone years, and how diverse they were. Yes, there were virginal bluestockings, but there were also women like Georgiana. As is often the case, the truth is more fascinating than fiction!

Back to the main Extras page →