Oh, those naughty rakes. With their wicked winks, sensual smiles, and bad boy habits, you just can’t take them out in polite society. But who wants to go out when you can stay in…?

Lucien Remington’s reputation as a debauched libertine who plays by no one’s rules–in business or the bedroom–is well deserved. He gets what he wants, social repudiation be damned. But society can keep from him the one thing he truly desires, the untouchable Lady Julienne La Coeur.

Until she sneaks into his club dressed as a man and searching for her irresponsible brother. Suddenly she’s in Lucien’s grasp, his to take, and his mind is filled with the most wickedly sinful thoughts. A gentleman would walk away from the temptation she presents. But then, Lucien has never claimed to be a gentleman…

“What the devil are you doing in my club?”

Julienne looked across the massive mahogany desk into blue eyes the color of which she’d never seen before. Somewhere between deep blue and purple, they were fringed with thick black lashes that were shamefully wasted on a man. “I need to find my brother, ” she said, lifting her chin in defiance.

One black brow arched. “A message left with the doorman would have been simpler, Miss…”

“Lady. Julienne. And I attempted to leave messages. I have yet to receive a response.” She shifted in her chair as the broadcloth trousers chafed the delicate skin of her derriere. The wig itched, too, but she refused to embarrass herself further by scratching.

“Dressing as a man was an original touch.”

She heard the laughter in the velvety voice and scowled. “How else was I to gain admission to a gentleman’s club?”

Julienne resisted the urge to flee as Lucien Remington rose from behind the desk and rounded it. She licked suddenly dry lips as she took in his height and the breadth of his shoulders. He was even more devastating up close than he had been across crowded ballrooms. Black hair and tanned skin displayed his extraordinary eyes to perfection. A strong jaw and generous mouth bespoke of his sensual nature, which was lauded far and wide by well-pleasured ladies of his acquaintance.

“Exactly, Lady Julienne. A gentleman’s club. Those garments do not disguise the fact that you are all woman. Ridgely’s foxed, or insane, not to have noticed.” His perusal paused briefly on her breasts before rising to meet her gaze.

“No one noticed,” she muttered.

And so he had. Almost immediately. She’d been in the club only five minutes at most before he’d grabbed her by the elbow and pulled her in his office. But then, it had only taken her five minutes to make a mess of the whole affair.

His voice softened. “What is so urgent that you would take such drastic measures to speak with your brother?”

As he leaned against his desk directly in front of her, the material of his trousers stretched over firmly muscled thighs. He was so close she could feel the heat emanating from his body. She smelled a hint of tobacco and starched linen, and another delicious scent that could only be the man himself.

Remington cleared his throat, drawing her attention. Julienne flushed at the knowing smile that curved his lips.

She straightened her spine, refusing to be cowed despite how beautiful he was or how flustered he made her. “My reasons are my own.”

Remington bent, bringing his mouth inches away from hers. “When your reasons include my club, I reserve the right to know what they are.”

Julienne’s gaze was riveted to his lips. If she leaned forward just a tiny bit, she could touch them with her own.

Would they feel as soft as they looked?

He pulled away, then lowered to his haunches and placed his large hands on her knees. She jumped at the heat that burned through the broadcloth. “Who is your brother?” he asked.

Julienne’s mouth parched the instant he touched her, making speech difficult. Lucien Remington was simply gorgeous. She’d always thought so, always compared her suitors to him and found them lacking in all respects. No one was as handsome, or as interesting, or as…wicked.

Her tongue flicked out to wet her bottom lip, and his eyes followed the movement. An ache came to the place between her legs. Julienne attempted to push his hands away, but when she touched his skin, her palms burned. She pulled away quickly. “A gentleman does not put his hands on a lady,” she scolded.

His hands slid higher, squeezing gently, his mouth gifting her with a roguish smile. “I never claimed to be a gentleman.”

And he wasn’t, she knew. His determination and ruthless business acumen were the stuff of legend. If it wasn’t precisely prohibited in writing, Lucien Remington would do it. He showed no leniency when it came to expanding his empire. He was widely disparaged for his “vulgar pursuit of money”, but Julienne found it rather thrilling. He cared nothing for the regard of others, a nonchalance she wished she could affect herself.

“Now, about your brother…?”

A devilish smile teased the corners of Remington’s mouth. “That explains why he hasn’t answered your messages, sweetheart. The earl owes me a great deal of money. I suspect he’s avoiding me.”

She said nothing, but she clenched her fists. Their situation must be worse than she’d thought. It was common for Hugh to carouse and spend days on end with his scapegrace associates. From experience she knew he most likely wasn’t in danger. But that didn’t ease her worry. Or their predicament.

“Why don’t you tell me what you need?” Remington coaxed, his long fingers rhythmically kneading her lower thighs. “Perhaps I can help.”

The sensations he elicited spread up her legs and into her breasts, flushing her skin. Her nipples hardened. “Why would you want to do that?”

His powerful shoulders flexed as he shrugged. “You are a beautiful woman. I like beautiful women. Especially troubled ones who require my assistance.”

“So you can take advantage?” She stood, her thoughts and body in turmoil, and his hands fell away. “I should not have come in here.”

“No, you shouldn’t have,” he agreed, his voice soft. Remington rose at the same time, towering over her. The top of her head barely reached his shoulders and Julienne was forced to tilt her head back to look at him.

She turned to leave, but his grip on her elbow stayed her. Heat radiated from his fingers and spread through her body.

“Unhand me,” she ordered in an unsteady voice. “I wish to leave.”

She didn’t, not truly, but she must. Remington’s proximity was doing terrible things to her. Wonderful, terrible things. Things it most likely did to countless other women.

He shook his head and grinned. “Pity that, since you’re not going anywhere. Not until morning. You’ve created enough of a stir as it is, coughing brandy all over Lord Ridgely. Returning to the floor, however briefly, would stir up the whole mess again. You’ve wounded his pride and he’s a pompous ass.”

“What do you suggest I do then?”

The amusement in his eyes never wavered. “You’ll stay the night in one of the rooms upstairs. I’ll entertain Ridgely and his cronies until the whole debacle is forgotten.”

She gaped. “You’re mad! I cannot remain in this establishment overnight!”

Remington laughed. The deep, rich sound gathered around her like an embrace and made her shiver. But she wasn’t cold. To her dismay, she was growing hotter by the moment. She couldn’t help it with the way he looked at her… Julienne had seen that look before. But no man had ever dared to give it to her.

She found she rather liked it.

“You went to a hell of a lot of trouble to get in here,” he purred. “And now you’re anxious to leave?”

Julienne sidestepped, but he didn’t release her. “My need was especially dire. I apologize for any trouble I-”

“You’ll leave in the morning. The hour is late. The streets aren’t safe.”

“My aunt will worry,” she argued.

She stilled, her eyes narrowing. “How do you know about my aunt?”

“I know everything about every one of the members of my club. Especially those who enjoy lines of credit.” Remington’s thumb began an absentminded caress of the hollow of her elbow. Julienne felt the warmth of his touch all the way to her bones.

“I know your parents died when you were very young and your Aunt Eugenia’s been your guardian for years. You and Montrose are always running roughshod over her. Your brother is brash, hotheaded, and still too young for the responsibilities of his title. You’re always bailing him out of one mess or another. And now I know how seriously you take that responsibility.”

She looked away, flustered that he knew such intimate details. “Do you also know how sick to death I am of that chore?” she said finally, surprising herself with the admission.

His voice turned soft and sympathetic. “I’m certain you must be. But you’ve done an admirable job. There’s not been even a breath of scandal attached to the La Coeur name.”

Julienne looked up at him, overwhelmed by his nearness. She felt slightly tipsy, but she couldn’t blame it on the brandy. Lord Ridgely was presently wearing most of it.

Remington led her across the room and pulled the bell. “I’ll have one of the courtesans give you a night rail. You’ll be comfortable. My hospitality is legendary.”

She scowled. “That’s not all that’s legendary.” 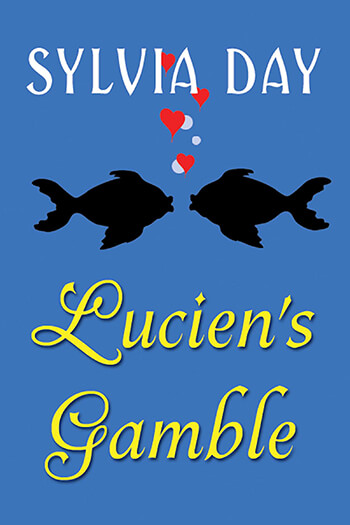 Novel: Lucien’s Gamble is also available as a part of Scandalous Liaisons.