ONE WITH YOU Valentine’s Treat 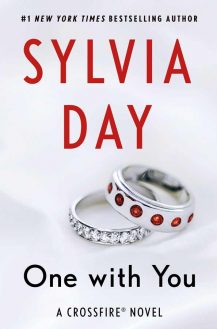 A small treat for Valentine’s Day.


Disclaimer: May be edited or deleted prior to publication.

When five o’clock rolled around, I took the elevator up to the heart of Cross Industries. As the car made the swift climb, my pulse rose along with it. After spending the last few days avoiding the one thing in the world I couldn’t resist, I was now going directly to him.

The freedom of that was exhilarating.

I sashayed off the elevator on the top floor, humming a tune. I even flashed a genuine smile at the receptionist as I waited for her to buzz me through the glass security doors. There was a second where I registered the way she looked at me with distaste, then I brushed it off. There were a lot of people who didn’t want me with Gideon.

They could all go fuck themselves. Asshats.

I also registered the ways heads turned to follow me as I made my way toward Gideon’s office. Curious gazes. I couldn’t blame them. For one, I was practically dancing on my feet at the end of the business day, when the frenetic pace of working in the city left most New Yorkers drained. And two, Gideon Cross was an enigma. Everyone wanted to know what his private life was like and I was the core of that.

When I turned the corner into the reception area of Gideon’s office, Scott stood to greet me. Sharply dressed in a pale blue dress shirt and crisp navy slacks, he was the first salvo in the impressive arsenal of impressions one received when meeting with Gideon.

Beyond him was the wall of glass that separated Gideon’s office from the rest of the floor. When it was clear, visitors could see Gideon at work against the backdrop of Manhattan, his tall and powerfully lean body dominating the eye despite the multimillion-dollar view framing him. Right then, though, the glass was opaque, which slowed my stride.

But Scott had already picked up the phone. “Miss Tramell is here for you, Mr. Cross.”

And just like that, the door glided open and invited me in.

With renewed excitement, I walked into Gideon’s office. Then I pulled up short again. He wasn’t alone.

Gideon half-sat on the front edge of his desk, his powerful thighs straining the flawless fit of his black trousers. His suit jacket hung in its usual place on the coatrack, leaving him dressed in a sleek black vest and pristine white button-down shirt. The tips of his inky hair brushed his collar and the sculpted line of his jaw, the perfect frame for that incomparable face that was instantly recognizable to anyone.

In his hand, he held a photo. And standing close enough to brush against him was Corinne Giroux, the woman he’d almost married. She was as leggy and striking as my husband, her hair as dark and glossy, her face classically beautiful. She wore a red strapless dress, showing off skin that was like rich pale cream.

I hated how the sight of her made my stomach knot. She wasn’t a threat. I knew that. It was my own insecurities that weakened me. But I was working on that.

Corinne’s head lifted and her aqua gaze settled on me. The line of her lips tightened for a moment, then curved into a razor sharp smile. “Hello, Eva.”

Gideon unfolded in the way he had that was both powerfully elegant and dangerously sexy. He dropped the photo in a small red box sitting on his desk and came toward me, his long legs eating the distance between us.

He didn’t speak aloud, but I saw his lips form the word, felt the impact of it in the way he looked at me. His hand reached for mine, squeezing.

I shifted to look past him. “Corinne.”

She was reaching for her purse, which had been resting on the desktop next to the box. “I have to run. Those copies are for you, Gideon.”

I could tell from the weight of it that his gaze never left my face. “Take them with you.” The rough velvet of his voice shivered through me. “I don’t want them.”

“You should finish going through them,” she said, approaching.

“Why?” He glanced at her when she drew abreast of us, his blue eyes as sharply cold as shards of ice. “If I have any interest in seeing them, I can always find them in your book.”

She left, leaving behind a thick tension. It was hard for me, imagining them enclosed together in Gideon’s office, the glass frosted for privacy as they looked at images of their time together.

Gideon took another step toward me, bringing our bodies together so that even a sheet of paper couldn’t slide between us. He caught my other hand, his head bowed over me.

“I’m glad you came,” he murmured, his lips brushing my forehead. “I miss you so much.”

The depth of his love was conveyed in his tone and I sank into it, my eyes closing.

His grip on my hands tightened. “You okay?”

“Neither was I.” He backed away, holding onto my hands until the growing distance pulled us apart. His reluctance to let me go, to move away, mirrored how I felt. A sense of desperation was there, heavy and painful. The time we’d spent apart had rocked us both.

I watched him walk to the desk, put a lid on the box, and then drop it into the trash. I won’t lie; I wanted to see them. The desire to do that was so strong I had to fight the urge to reclaim the box.

But I didn’t. For the same reason I forbade Gideon from watching the video of my time with Brett. Our exes were in our pasts and they were going to stay there.

Which didn’t mean that I wasn’t going to have a few words with Corinne.

Gideon hit the control that closed his office door again.

His face gave nothing away, but something hot flared in his gaze. “Did you?”

He returned to the position he’d been in when I entered, leaning back against the smoked glass of his desk. “What’s next for you, then?”

“I’ve got a wedding to plan.” And some loose ends to tie up. But we’d get to those later.

“Ah.” A small smile touched his mouth and sent tingles racing through my veins. “Good to know.”

He beckoned me closer with a crook of his finger.

“Meet me halfway,” I countered.

We met in the middle of the room.

“Is this what you want?” he asked me quietly, his gaze searching my face.

“You’re what I want. The rest is just logistics.”

He wet his lips with a slow swipe of his tongue and I nearly moaned aloud. Staying out of his bed was going to kill me, but it had to be done.

Still, I couldn’t resist lifting my hand to brush an errant strand of his hair back from his forehead. When I realized what I was doing I tried to stop, knowing that every touch sent us down a dangerous path of temptation.

Gideon caught my wrist in mid-air. A heartbeat later his cheek was pressed against my palm, his eyes closed as he absorbed my touch. His nostrils flared as he inhaled the scent of my perfume.

Abruptly, the strain that had tightened his posture left him. I felt it slip away. More, I felt something shift inside me, too. The power of it sent me reeling.

With a single touch we could center each other.

This was what we had. What we were fighting for.

And we were going to win.

Want to know when this book releases? Sign up for the newsletter here »

176 Responses to ONE WITH YOU Valentine’s Treat